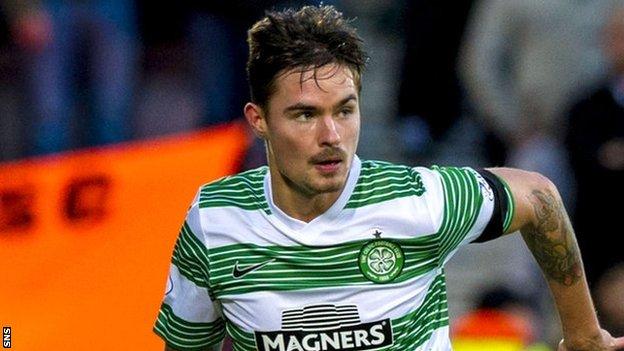 Celtic full-back Mikael Lustig will be out of action for four months after undergoing a double hip operation.

Manager Neil Lennon said of the 27-year-old, who had been playing while carrying the injury: "The procedure was a bit more in-depth than first thought.

"We are hoping he will be back around March-April time.

"He had a lot of work done, so it makes his recent performances even more remarkable really. He was in a lot of pain after games."

He's a big player in team and going to miss him, but we have Adam and Darnell to fill his shoes

Lustig had delayed the surgery while Celtic remained involved in the Champions League and his national team, Sweden, were involved in World Cup qualifiers.

"It needed doing and hopefully he will come back an even better player, which would be brilliant for us," added Lennon.

Darnell Fisher, 19, has deputised for Lustig in domestic competition.

Central defender Efe Ambrose said of Lustig: "He's a big player in [the] team and [we are] going to miss him, but we have someone to fill his shoes.

"We have Adam and Darnell and even myself, as I can play in the right-back position. But we will miss him."