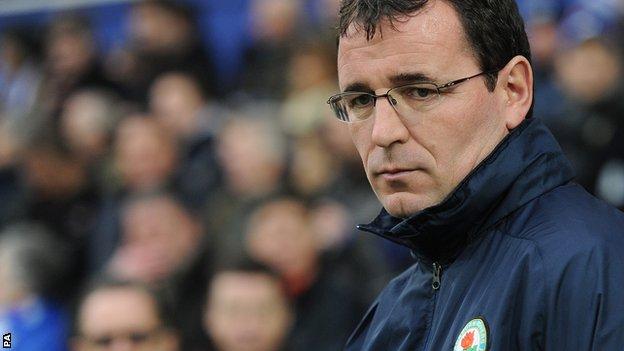 Blackburn Rovers manager Gary Bowyer must generate his own funds if he is to add any new players to his squad during the January transfer window.

"It's been well documented about our accounts," Bowyer, whose side are six points adrift of the play-off places, told BBC Radio Lancashire.

"We have drawn up targets but I think we'll be more reactive than proactive in the market in January."

The 42-year-old continued: "It's been well documented that we're going to have to get the players on the fringes of it - try and get them out if we can - and raise funds that way."

Blackburn paid undisclosed fees for midfielders Ben Marshall and Corry Evans in the summer, while a number of others - including defenders Tommy Spurr and Matt Kilgallon and striker DJ Campbell - joined on free transfers.

Hull manager Steve Bruce confirmed they have rejected a bid from Rovers for midfielder Tom Cairney, who is

"Tom's doing quite well there and we've received an offer, which we turned down, but I'm sure negotiations and discussions will be ongoing," Bruce told BBC Radio Humberside.

Blackburn have maintained a firm stance on the future of top scorer Jordan Rhodes and repeatedly claimed the Scotland striker is not for sale, and while saying that is still the case, Bowyer admitted "everyone in the squad has their price".

And he would not disclose how many players he is looking to move out of his squad, adding: "It's very difficult to put a number on it, but you always have to make sure a club is interested.

"It's alright us saying we've got one, two or three. But if no clubs are interested in them, it doesn't matter."