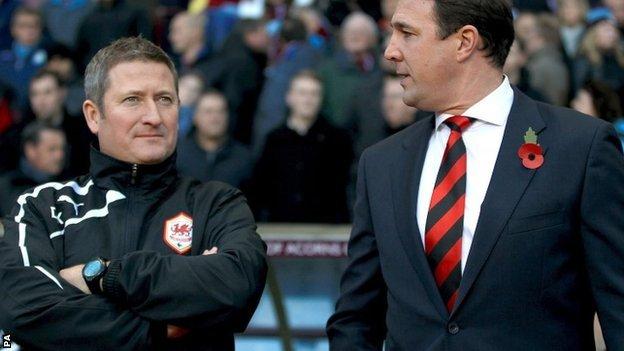 The 41-year-old was given an ultimatum on Monday by owner Vincent Tan to resign or be sacked.

Assistant manager David Kerslake fielded questions from the media instead but refused to discuss Mackay's situation, saying: "All I'm here to do is talk about the Liverpool game."

"One can only assume that the end-game has started at Cardiff City and that Malky Mackay probably won't be in charge for Liverpool."

Tan is expected to be at Anfield for Saturday's Premier League game.

The Malaysian owner has written to Mackay and listed his grievances.

Tan criticised the Scot at length in a range of areas, including signings, transfer budgets, results and style of play.

Mackay, who has been in charge of Cardiff since June 2011, has previously said he will not resign.

Despite refusing to answer questions about Mackay, Kerslake did add: "Every manager and every coach knows it's a precarious job. Nothing changes.

"Malky is in the pavilion (training centre) as we speak.

"As far as we are concerned, it is just another game and we have prepared as professionally as always."