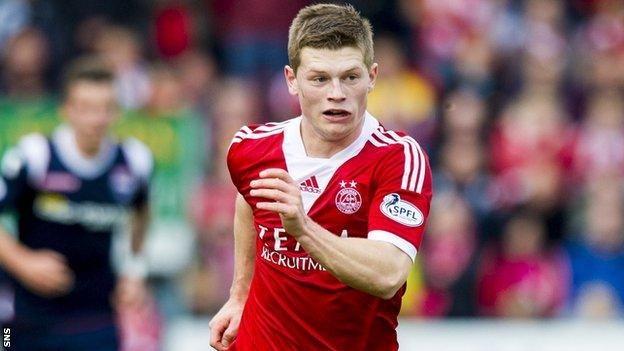 Forward Smith's new deal runs until the summer of 2017 while Rogers, who is currently on loan with Airdrieonians, has signed a new one-year contract.

"Obviously I am over the moon to sign," Smith told Aberdeen website. "I did not need a lot of convincing.

And manager Derek McInnes added: "It is terrific news. I am delighted Cammy sees his future with us long term."

Rogers, 19, has played twice for Scottish League One Airdrie in recent weeks.

Smith, 18, made his Dons debut in April 2012 and has made 20 first-team appearances, scoring twice.

"As soon as the manager pulled me aside I said 'yes' almost straight away," Smith said of his new deal.

"My family and I are delighted and honoured to be part of this football club and hopefully I can help bring success to Aberdeen.

"It was a no brainer to stay here and to try and progress and play regular first-team football. I really enjoy working with Derek and [assistant] Tony [Docherty].

"I think the whole city is excited about what is happening here. As players though we need to just keep our heads down and keep working hard and let you [the media] do all the talking.

"Everything has gone so quickly since I arrived here as a young boy. I know how fortunate I am to be a professional footballer and how lucky I am to be at this club. I never take my job for granted."

McInnes, whose side are joint-third in the Scottish Premiership and are also still in both domestic cup competitions, feels Smith is "full of potential".

"In the next three-and-a-half years he has the chance to develop and be a really good player," explained the manager.

"He has done very well for me when he has played in the first team.

"He has got areas in his game that he needs to improve but he has a really good work ethic and is desperate to be the player we all know he can be."