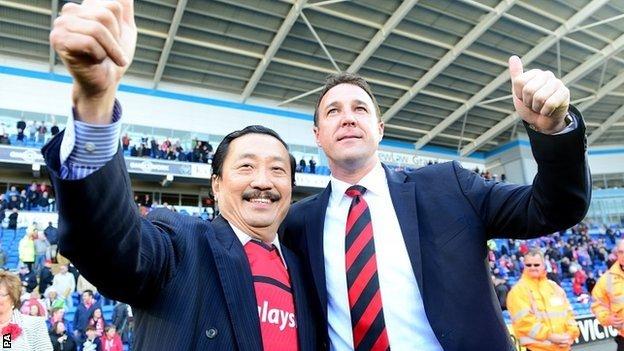 Cardiff City manager Malky Mackay has been told by owner Vincent Tan to resign or he will be sacked.

In a letter emailed to Mackay on Monday, it is understood Tan listed in depth his grievances with the Scot.

"The tension between Malky Mackay and Vincent Tan has been simmering for some time. This week it boiled over and there will only be one outcome.

"Mackay's two-and-a-half-year reign as Cardiff manager is drawing to a close - it's not a matter of if but when.

"The man who guided Cardiff to the Premier League will not see out their maiden season in that competition.

"Other staff are known to be keen on following Mackay through the exit door, and more still if Tan takes personal control over the recruitment of his successor.

"The Malaysian businessman is scheduled to arrive in the UK on Friday night ahead of Cardiff's trip to Liverpool the next day.

"If Tan follows his words with actions, it is likely to be Mackay's final game as manager."

Tan criticised 41-year-old Mackay at length in a range of areas, such as signings, transfer budgets, results on the pitch and style of play.

The Malaysian businessman also questioned the former Watford manager's record as a boss.

Mackay has previously said he will not resign.

A Cardiff spokesman told BBC Sport: "The club is not party to any letter sent from one person to another."

Tan said he was "extremely upset" after Mackay revealed he was hoping to recruit three new players in the January transfer window.

The ex-Scotland international, who was named Cardiff boss in June 2011, led the Welsh club to promotion from the Championship seven months ago, but his future became uncertain when head of recruitment, Iain Moody, was removed from his position in October.

One of Tan's concerns surround a perceived overspend of the transfer budget agreed between Mackay, Lim and Moody.

The owner claims the total budget was £35m and that £50m was spent including add-ons.

Mackay and Moody have denied those claims, insisting the £35m was solely for transfer fees and that Lim and Tan had no complaints about that rising with add-ons.

Former England manager Graham Taylor, who worked with Mackay when he was chairman of Watford, believes the Scot should stand his ground.

"Malky has an inner strength and I see no reason why he would resign," Taylor told BBC Radio 5 live.

"'Let them sack you, Malky', is what I would say to him. He has a contract and if one party pulls out of it they should be made to pay up the remainder of that contract."

He added: "Who is Tan to know these things? Yes, from an ownership point of view and financial point of view, of course he has some knowledge.

"It's the pantomime season and Vincent Tan wants to play the villain. He's doing a very good job of that in South Wales," he said.

"Nothing is guaranteed but what you do have at the moment is a manager capable of keeping the team in the Premier League.

"Of course we all want a little bit better - that's football fans - but sometimes you've got to be careful what you wish for."

The Bluebirds, who are 15th in the Premier League, are away to Liverpool on Saturday.