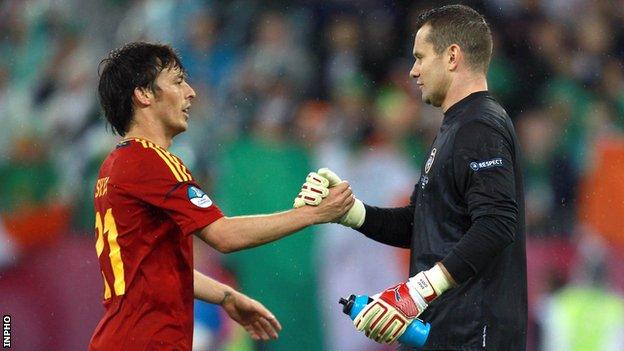 Republic of Ireland manager Martin O'Neill has said that 125-times capped goalkeeper Shay Given could make a return to the squad.

Given, 37, retired from Republic duty after Euro 2012 but is now believed to be open to an international return.

"I haven't spoken to Shay but I would like to at some stage, if he says 'I'm back'," added the Republic boss.

"I certainly wouldn't discount it if I'd had that conversation and he was thinking about coming back."

After losing his first-team place at Aston Villa, Given has been impressing in recent weeks while on loan at Middlesbrough.

West Ham midfielder Mark Noble and Norwich winger Nathan Redmond, who have both played for England Under-21s, are among a number of uncapped players believed to be on O'Neill's radar at the moment.

The Republic boss was reluctant to get into specifics at Thursday's end-of-year media briefing in Dublin although he did refer to Redmond, who made his England Under-21 debut this year.

"I've certainly seen one or two players who have interested me.

"I don't want to individualise now but young Redmond plays at Norwich and I'm aware there might be some kind of connection."

Ahead of the Euro 2016 qualifiers draw in February, O'Neill warned against suggestions that achieving a place in the expanded 24-team finals will be "easy".

"It's nice to hear that some people are saying that we've already qualified, which is really good and means I can put my feet up," joked O'Neill.

"Of course the more teams that qualify, you would have to think that you've a chance.

"I would love to be in the easiest possible group but it's not going to happen."