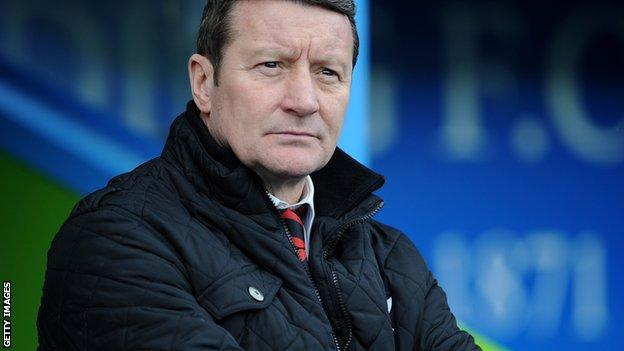 New Barnsley manager Danny Wilson believes his squad has the talent to achieve survival in the Championship.

The 53-year-old returned to Oakwell for a second spell in charge on Tuesday.

The Reds are currently bottom of the table having recorded just three wins all season.

"Without a doubt this squad is capable of staying up. People might say we have no chance but I haven't come here thinking that," he told BBC Radio Sheffield.

"I have seen enough in training and in the games that I have watched to see the players have a great talent."

Wilson became player-manager of the Tykes in 1993, and the side finished runners-up in the old First Division in the 1996-97 season to earn promotion to the top flight for the first time in their history.

They lasted just one year in the Premier League, but reached the quarter-final of the FA Cup, defeating Manchester United on the way.

The former Sheffield Wednesday and Sheffield United boss does not think too many changes are needed and they are in a position to escape relegation, starting with a trip to Elland Road to face Yorkshire rivals Leeds on Saturday.

"There is not a great deal wrong, there are always fine lines in getting results and not getting them," he said.

"I have told the players, if we can start eliminating one or two things, squeeze the for and against goals column, we will be half way up the league.

"We have to take the bull by the horns now, there is no settling in period, I certainly don't and we have to get on with it.

Wilson's last job in management was at Sheffield United, where he left in April 2013, and having been away from Barnsley for nearly 15 years, says he is back where he feels "so comfortable".

"The atmosphere is still the same, the passion from the fans is still there and you can feel all that straight away."