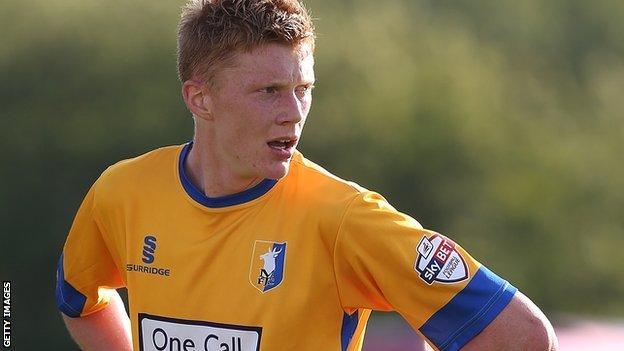 Mansfield Town top scorer Sam Clucas has been ruled out for up to eight weeks with ankle ligament damage.

The Stags have also lost attacking midfielder Ben Hutchinson, 26, for four to six weeks with a hamstring injury.

Both players limped off in the 4-1 defeat to Oldham in Tuesday night's FA Cup second round replay.

Clucas, 23, has netted 11 goals this season after joining in the summer from Hereford, while Hutchinson has only just returned from a groin tear.

"It's like a conveyor belt here. Just when you are getting one or two back, you lose one or two others, and both are quality players," manager Paul Cox told the club's website.

"But we've just got to get our heads down and get on with things. Injuries are part and parcel of the game and happen at other clubs as well."

Clucas's injury is a blow to former club Hereford, who hoped his potential sale in January would earn them a 15% add-on fee to ease their financial worries.