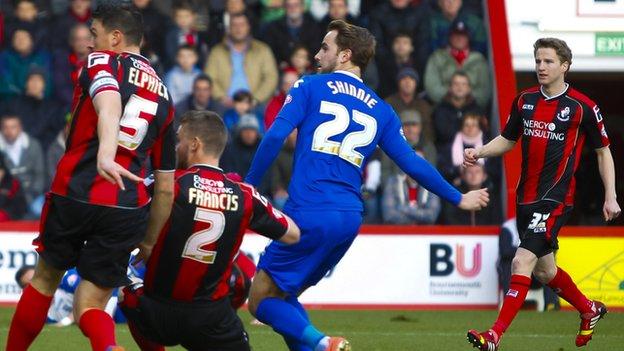 Birmingham City midfielder Andrew Shinnie insists there could be more come from the in-form Blues following their climb up the Championship table.

Last Saturday's 2-0 win at Bournemouth, in which the recalled Shinnie hit his first goal for the club, stretched their unbeaten run to six games.

"We're not setting targets as we know we're not the finished article, but now we're only looking up," he told BBC WM.

"We can go as high we want. We're up to 14th and catching teams around us."

Birmingham dropped into the relegation zone following a 1-0 home defeat by Charlton Athletic at the beginning of November.

But, although they have still not won at St Andrew's in two months, three successive away victories at Huddersfield, Barnsley and Bournemouth have eased them six points clear of the relegation places.

"We were playing well, but not picking up points - but now we've climbed the table.

"Football is all about confidence and the character the boys have shown to turn it round has been great. We'll now be doing all we can to keep this run going over the busy Christmas period."

Birmingham face four Championship games over the 12 days of Christmas before the luxury of almost a week's break ahead of their FA Cup third round clash against the winners of the Crawley-Bristol Rovers second round replay.

Their game was abandoned after the break on Wednesday because of a waterlogged pitch, and with no space to squeeze in another fixture over Christmas, they will meet again on FA Cup third round day on 4 January.

The winners are then scheduled to travel to St Andrew's three nights later on Tuesday, 7 January.