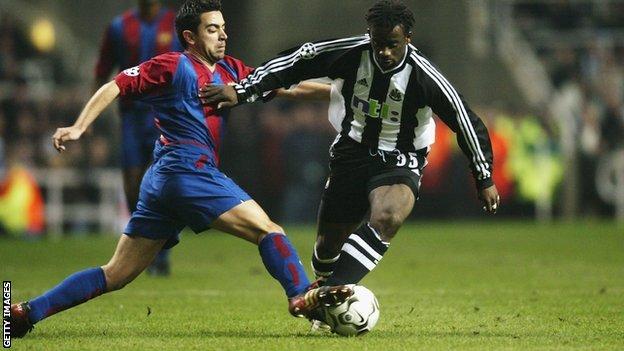 The Citizens, who play on an artificial pitch, are in Northern League Division One - English football's ninth tier.

Bernard was signed from Lyon by Newcastle's then-manager Bobby Robson in 2000 and was part of their 2002-3 Champions League squad.

"I want to make Durham one of the best feeder clubs in the north east. At the moment, I don't think the area develops enough youngsters," he told BBC Sport.

In the 1920s, Durham spent seven seasons in Division Three North - their only spell as a Football League club.

Since reforming in 1950 after disbanding 12 years before, they have occupied the lower echelons of the non-league pyramid.

They won promotion to the Northern Premier League in 2009, but were told by the Football Conference that because of their pitch, they would not be eligible to progress further up the ladder.

"At the moment, I am not thinking about the problem of the pitch because that is a few promotions away," Bernard said.

"I want to raise the profile of the club and get links with Sunderland, Newcastle and Middlesbrough.

"Look at the England team, how many of them are from around here? I'll do everything I can to get players to Durham and help develop them."