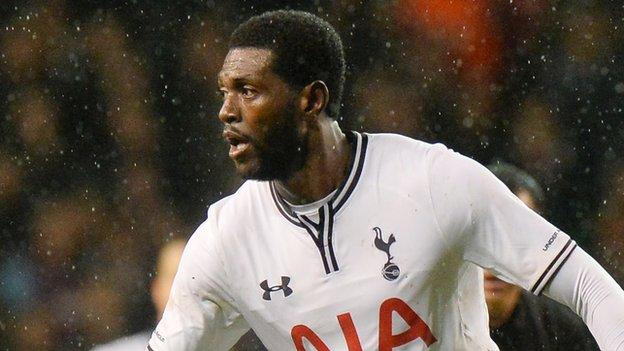 Tottenham striker Emmanuel Adebayor has been boosted by his goal on his first start of the season in the Capital One Cup quarter-final against West Ham.

Although Spurs lost Wednesday's match 2-1, Adebayor believes there are positives from the game.

After the sacking of Andre Villas-Boas on Monday, Adebayor was selected by interim boss Tim Sherwood.

"I was hanging in there waiting for my chance. Tim gave me the chance to play football again," said Adebayor.

"I've still got my smile on my face. I got a chance, I took it well. I'm very happy.

"Now the most important thing is me scoring goals, confidence is back."

Adebayor also believes Tottenham can arrest the slum that led to the departure of Villas-Boas, which came after a 5-0 home thrashing by Liverpool.

And he expects the Londoners to bounce back against Southampton on Sunday.

"We just have to keep working hard, put more heart into it and it will be better.

"Hopefully this Sunday we'll have a chance to win it. We have to get out there with confidence, with belief and take the three points."