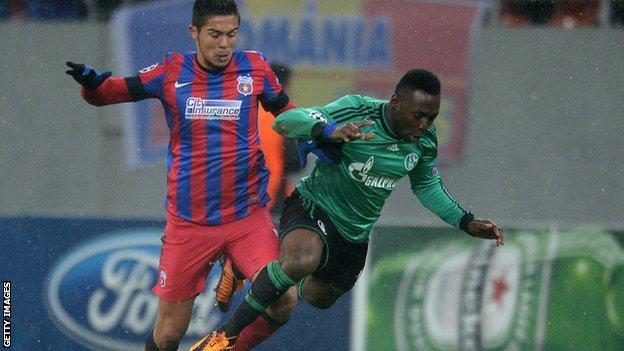 Fit-again Schalke striker Chinedu Obasi says he is ready to make up for lost time after what he describes as a frustrating spell on the sidelines.

The Nigerian, 27, moved to Gelsenkirchen on a permanent deal from rivals Hoffenheim in March 2012.

But a bout of injuries have left him watching the The Royal Blues' impressive campaign from the sidelines.

He has only featured twice this season since his return to action in late November, but the Super Eagle is determined to win back his place in the side.

"I'd be lying if I said it wasn't frustrating at times, to watch your team play when you're not able to play," Obasi told BBC Sport.

"I was a bit dampened but I've learnt a lot from it and done a lot of work mentally and physically to get back to where I am now.

"I've been working hard and waiting patiently for my chance, and when it hopefully comes I'm determined to make the best of it.

"As a professional you know the competition for places is really good and you want to be out playing.

"The coach has been very encouraging so I have to work as hard as I can to get back into the fold."

Obasi, who has made 28 appearances for his country, suffered a shin injury for the second time in his career in June but says his time in exile has turned out to be a blessing.

"When you look at other people, some have a much harder life than you so you've got to be grateful and stay positive," he said.

"Sometimes you think you've been hard done by, but you've got to look forward and I've learnt a lot from it."

Obasi's last game for Nigeria came in a 0-0 friendly draw against Botswana in November 2011, in what was coach Stephen Keshi's first game in charge.

And the man who gave him his last cap told the local media this week that Obasi still has an international future with the African champions.

But with only two substitute appearances coming in the Uefa Champions League and German Cup, Obasi knows he has his work cut out.

"It's heart-warming to hear the coach say that because it's more than two years since I last played for my country," said Obasi.

"But I cannot get carried away because without me they won the Nations Cup and qualified for the World Cup in Brazil.

"It's motivational to know that there is a chance to get back but I must work extremely hard to earn a recall.

"I can't kid myself thinking it's going to be easy. But the hard work obviously starts now."

He is the only Nigerian to have appeared in all Fifa World Cups [Under 17, Under 20 and Senior] as well as the Olympics.