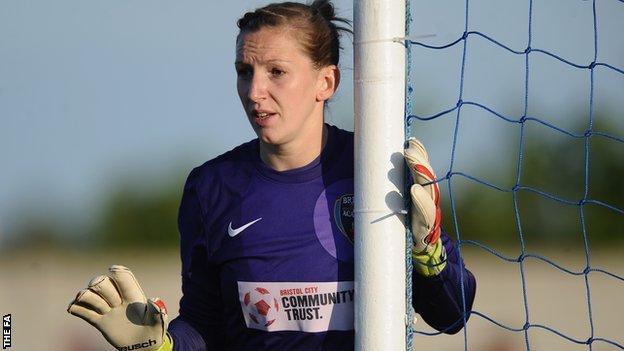 She played every minute of every game in three seasons with the Vixens.

The 30-year-old, capped 26 times, started her career at Chelsea before spells with Fulham and Birmingham.

"My ambition is to be England's number one so the added competition at Arsenal is what I need at this point in my career," she told BBC Sport.

It is difficult leaving Bristol because it has been a great three years, the players and the staff have been great and the supporters have been brilliant. It's just time for something new

"It was time for a new challenge, Emma Byrne has re-signed for Arsenal as well, and I've never had the competition for a starting place at Bristol," Chamberlain said.

Arsenal have lost key midfielder Kim Little to Seattle Sounders but they are expected to announce further signings this week.

The Gunners beat Bristol to win last season's FA Cup and also won the Continental Cup title, but they finished third in the league behind winners Liverpool and second-placed Bristol.

They are also involved in this season's Champions League, facing Birmingham in the quarter-finals in March.

"Some say it was an ordinary season for Arsenal but they still won two trophies," Chamberlain said. "I'm sure they will bring players in, they are great side, and they haven't turned into a bad team.

"They have great backing from the men's team, and along with Liverpool, Bristol and Chelsea, it looks like next season will be competitive.

"It is difficult leaving Bristol because it has been a great three years, the players and the staff have been great and the supporters have been brilliant.

"It's just time for something new."

"The pair are both talented, experienced keepers and I know they'll provide valuable competition for each other in the seasons ahead."