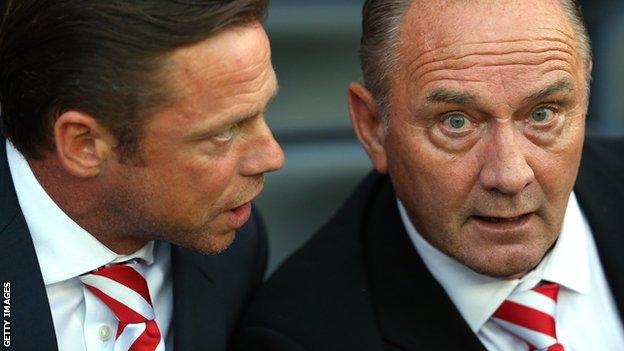 Doncaster Rovers assistant manager Brian Horton says it is unfair that British managers and coaches are being overlooked in favour of foreign ones.

Horton was appointed by Scot Paul Dickov, who joined the Championship club after three years at Oldham.

But only half of the managers at the 20 Premier League sides are British.

"The coaching system and football [in Britain] is the best in the world. We are bypassing a lot of good managers," Horton told BBC Radio Sheffield.

Foreign managers in the Championship

Horton was appointed as Manchester City manager in the 1993-94 season, when a 22-team top-flight had just one foreign manager - Ossie Ardiles at Tottenham.

Horton, 64, is concerned that chairmen are looking at managers and coaches from abroad, when Brits are capable of filling the roles.

"I am not against foreign people coming in, but are they better than ours?" he asked.

"If it is Pep Guardiola or Manuel Pellegrini, you can't argue with that. They are top managers, but sometimes they [the chairmen] are giving foreign managers the heads up over our young coaches."

"They do their coaching badges, go through the process to get their pro-licenses, and they can't get a job.

"They should be given a chance, rather than the foreign managers that are coming in."

Horton had spells as manager at Hull, Oxford and Huddersfield, and is one of the few English managers to have taken charge of over 1000 games.

And he has backed Dickov to be a success, despite the South Yorkshire side lying 20th in the division, just three points off the relegation zone.

"Paul was a player who gave 100%, played from the heart and fans like to see that," he added. "He is infectious and will earn a reputation for himself.

"I have said to Paul it is a great opportunity for British managers now to go and prove themselves and do well. The world is their oyster if they can do that."