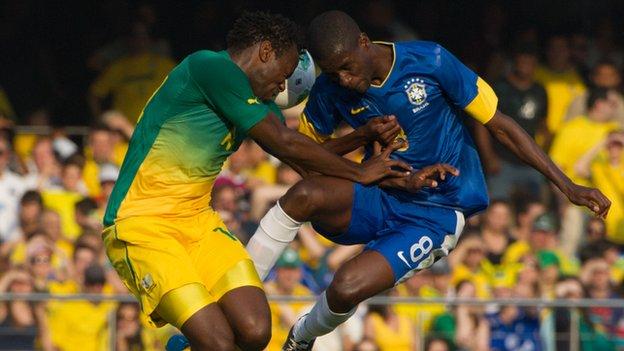 South Africa have announced they are to play five-time world champions Brazil in a friendly match at the FNB Stadium in Johannesburg on 5 March 2014.

The match will serve as a warm-up for Brazil, who host next year's World Cup.

It will also be a chance for Bafana Bafana to build on November's 1-0 win over reigning world champions Spain.

"A good performance against Brazil will convince the doubters that South Africa is back," said South African Football Association president Danny Jordaan.

If you want to be the best, you have to play the best

"This is one of the last games Brazil will play before the World Cup and they will be fielding a team of stars who will be absolutely determined to play at their best to make sure they are in the World Cup team.

"Our team is also hungry for success. It's going to be a really good game."

South Africa failed to qualify for next year's tournament in Brazil but coach Gordon Igesund believes they are improving and will be keen to show that the performance against Spain was no fluke.

"This is a huge game for us, good for the country and players. We have just beaten Spain and we want to give a good account of ourselves against the in-form Brazilians. To have them here as part of their preparations for the 2014 World Cup shows the amount of respect they have for us," said Igesund.

By organising such testing friendlies, South Africa are certainly giving themselves the kind of challenges that will gauge their development.

Jordaan added: "If you want to be the best, you have to play the best and having Brazil as Bafana Bafana's opponents in March is testimony to our ambition of making our national side world beaters."

The sides have met four times before, with Brazil winning every game. The last time they played was in Sao Paulo in September 2012 - Igesund's first game in charge of Bafana Bafana - and Hulk scored the only goal of the match.