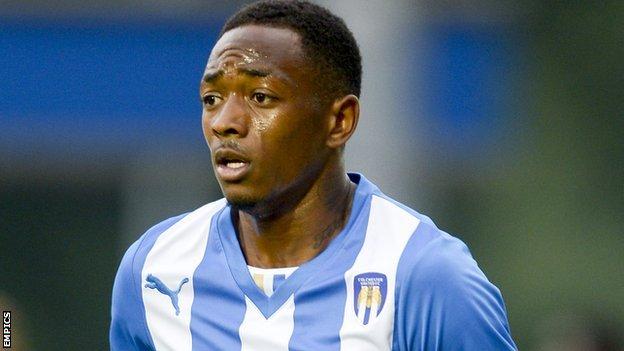 Colchester United winger Sanchez Watt has said he will be a stronger player after recovering from a thigh injury that has kept him out since August.

Watt, 22, will return to the U's squad for Saturday's trip to Oldham Athletic.

"I haven't played a game since Leyton Orient and even in those games I was a bit injured," he told BBC Essex.

"I've been putting in the work but no one gets to see that unless you're on the pitch, so now I want to do it for the team, manager and fans."

The former Arsenal trainee, who joined the U's permanently this summer, said the seriousness of the injury was not obvious early on, even though he had been playing with pain in his thigh since pre-season.

"They told me I would be out for a couple of weeks," he said.

"No one wants to be out for more than a day so that was hard to take, but as I was working towards that I broke down again.

"Then I took time off again and I came back and trained with the team for one day and I got injured again so we got it checked out and I had two thigh strains on both legs."

"I've been out for a long time and you get a little bit distant from the team," he said.

"The gaffer gave me a little bit of time off to get my head straight and to come back strong.

"Hopefully I'll be better than I was at the start of the season."

Colchester boss Joe Dunne welcomed Watt's return to the squad but said he would not be rushed back into action too early.

"The fact that we've got him into the squad is a major bonus," he said.

"He's desperate to get back playing but we have to manage it properly."