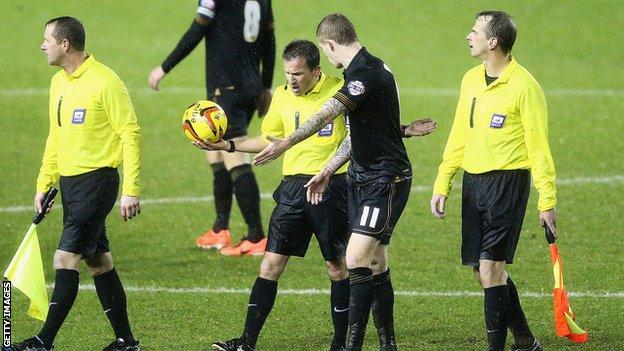 The visitors led 1-0 after 59 minutes at Hillsborough but torrential rain left the surface unplayable.

Latics manager Uwe Rosler added: "It was very harsh for us but the referee did the right thing."

James McClean had put Wigan in front but the conditions worsened and Stroud consulted with both managers before deciding to call the game off.

Rosler told BBC Radio 5 live: "In the first half, the conditions were fair for both sides, but in the second half the rain made it very difficult. Nick Powell went in on the keeper and the ball stuck in the water. I've no complaints."

And Gray continued: "Uwe will be very disappointed. Is it a 'get out of jail free' card for us? It probably is.

Other games were affected by the adverse weather conditions on Tuesday.

The Capital One Cup quarter-final between Stoke City and Manchester United was at the Britannia Stadium.

And Crawley's FA Cup second-round replay with Bristol Rovers was because of a waterlogged pitch.