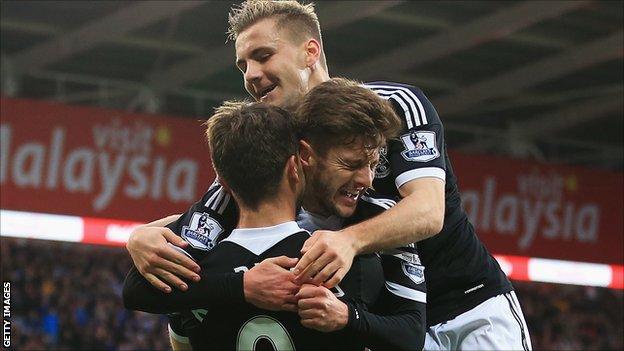 City's fans protested before kick-off against controversial owner Vincent Tan but that same fight and passion was not matched by the Cardiff players - who were easily beaten by the Saints.

Jay Rodriguez slid in at the back post to open the scoring, before his close-range volley doubled their lead.

Lambert made it 3-0 from close range inside 27 minutes to seal victory.

The result sees Southampton remain in ninth while Cardiff slide down to 16th in the Premier League table, a point off the bottom three, as pressure continues to mount on manager Malky Mackay - who was recently asked to quit or be sacked by Tan.

Mackay's departure looked inevitable before Cardiff chairman Mehmet Dalman released a statement on Sunday that indicated he would remain in charge for the "foreseeable future".

Dalman is trying to repair the fractured relationship between manager and owner but those efforts could be severely tested after an inept first-half performance from the Scot's side.

However, his afternoon could have been a lot different had Peter Whittingham not spurned an early chance for the Bluebirds.

"What now for Malky Mackay? Cardiff were outplayed by a Southampton side who broke their run of six games without a victory. All the goals came in the first half and Saints were very good value for the win."

He was soon made to pay for that miss with Rodriguez giving Saints the lead after sliding the ball home at David Marshall's back post after a wonderful cross by England colleague Adam Lallana.

Rodriguez soon doubled their lead, again finding himself unmarked at the back post as he volleyed home Lambert's cross to punish yet more slack defending from the hosts.

Lambert then got in on the act, firing home a half-volley from close range following a Rodriguez knock-down to further compound Cardiff's misery.

To their credit Mackay's side did not give up and Andrew Taylor's shot, which deflected off Jose Fonte, forced Gazzaniga into a sprawling save.

Cardiff introduced Andreas Cornelius at half time and he almost made an immediate impact, heading a corner wide from close range, while at the other end Jack Cork fired a fierce drive from range straight at Marshall.

Rodriguez went in search of his hat-trick and was denied by a wonderful headed clearance under his own post by Cardiff's Kevin Theophile-Catherine.

It was the last real action of a lacklustre second half, but Saints' early efforts ensured the outcome had long been decided.

"The victory today was fully deserved. We were amazing today, we were excellent.

"We controlled the match but we were superior to them. We were precise and my players were very brave.

"The entire team put in an amazing performance today but of course one player will get the credit but the whole team deserves credit.

"There is a long time left until the World Cup so let us enjoy today and take it each game at a time.

"There are many games coming so it was important for our confidence especially after six games with no win. It was important to get that winning feeling back."