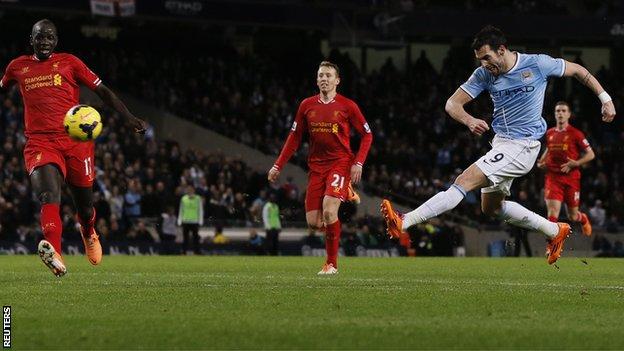 Manchester City closed to within one point of Premier League leaders Arsenal with a comeback victory over Liverpool in an enthralling encounter at The Etihad.

Liverpool topped the table on Christmas Day and, after Arsenal's win at West Ham earlier on Boxing Day, would have returned to the top had they been the first team to beat City at home this season.

Philippe Coutinho gave them a first-half lead - only for Manchester City captain Vincent Kompany to swiftly head an equaliser.

Home is where the heart is

Manchester City have scored in 59 home Premier League games in a row, while Alvaro Negredo has netted in each of his last nine appearances at the Etihad Stadium

City's victory was secured in first-half injury time when Liverpool goalkeeper Simon Mignolet made a hash of his attempt to keep out Alvaro Negredo's chip, ensuring Manuel Pellegrini's side kept their flawless home league record.

Liverpool, however, will take great encouragement from a performance that merited a draw, with Raheem Sterling wasting the best of several opportunities they created after the break, firing over with the goal at his mercy after good work from the dangerous Luis Suarez.

Pellegrini will regard this as further evidence City's title challenge is gathering momentum, while Liverpool manager Brendan Rodgers will be convinced this proves they can live comfortably in such elevated company.

The Northern Irishman will also question an offside decision against England winger Sterling in the first half and a late penalty claim when Suarez's shirt was pulled by Joleon Lescott.

Another big plus for City was an excellent performance from recently recalled keeper Joe Hart, who saved crucially from Coutinho and Jordan Henderson either side of the interval.

As a superb first half started to unfold, City were quickly into their stride and Mignolet was relieved to see a far post header from Jesus Navas glance off the woodwork to safety.

But Liverpool grew into the game and were soon demonstrating the passing and attacking movement that has become a characteristic of their game this season.

Sterling put the ball in the net after being incorrectly flagged offside - a desperately poor decision - but there was no escape for City when he was involved again as Liverpool went ahead.

Skipper Suarez's flick played in Sterling, who rounded Hart then stood aside as Coutinho arrived to turn the ball into an unguarded net from the angle.

Rodgers would have been desperate to see his side to at least consolidate their control but City were level inside seven minutes. Kompany escaped the close attentions of Martin Skrtel, who was tugging at his shirt, to head David Silva's corner down and past Mignolet.

The commitment of both sides to attack made a thrilling spectacle and only outstanding work by Hart at the end of another wonderful spell of Liverpool passing ensured City stayed on level terms.

Suarez and Jordan Henderson were the creators as Coutinho pounced, but Hart was down low to his left to save.

The value of Hart's save was emphasised in first-half stoppage time as an error from opposite number Mignolet saw City go ahead.

Samir Nasri's perfect early pass sent Navas clear. He found Negredo, whose attempted lofted finish carried neither power, pace or height, only for Mignolet's feeble attempt with a raised hand to make sure it dropped into the net behind him.

Rodgers made his first change midway through the second half, in which both sides had once again refused to take a backward step, sending on Victor Moses for Coutinho.

City, as ever, were a constant threat on the attack but as the half progressed it was Liverpool who made the better chances.

Glen Johnson's poor control allowed Hart to block at his near post before the keeper dropped down to grab a flick from Henderson.

The best chance fell to Sterling with 18 minutes left when Suarez escaped down the left flank and set the youngster up with what looked a like a simple finish from eight yards, only for him to sky an effort hopelessly over the top.

Manchester City have equalled the Premier League record of scoring 53 goals in the opening 18 games. It was previously set by City in 2011-12.

Suarez had appeals for a penalty turned down in the closing minutes. He had his shirt tugged by Lescott but his over-dramatic reaction may have persuaded referee Lee Mason against pointing to the spot.

City are one point behind Arsenal, with Liverpool dropping to fourth behind Chelsea, meaning just three points separate the top four.