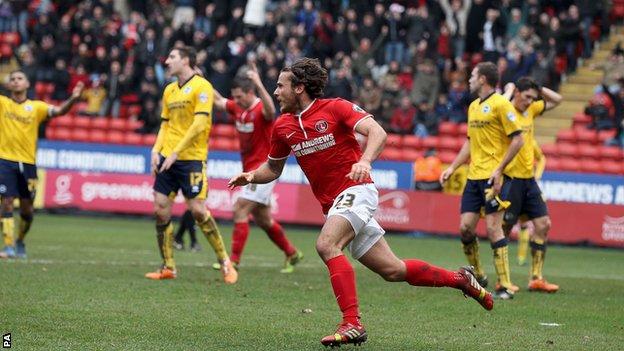 The Seagulls took the lead midway through the first half when Leonardo Ulloa swept in a low shot.

But Charlton hit back as defender Wilson first fired in from close range, before pouncing on a loose ball to make it 2-1 in the second half.

Yann Kermorgant added a third with a free-kick but Ulloa poked in late on to set up a tense finish.

Charlton, who started the day one place above the relegation zone, have struggled for form in front of their own fans this season, winning just two of their 10 games at The Valley prior to this Boxing Day fixture.

Brighton had lost just twice away from home and it was little surprise when the Seagulls took the lead.

The hosts should have been level minutes later when Cameron Stewart cut inside and hit a low shot just wide of goal, before Simon Church curled an effort wide.

Their positive response to going behind was rewarded just as Wilson smashed the ball past goalkeeper Peter Brezovan after being slipped in by Kermorgant.

From then, Charlton were largely the better side, with Stewart particularly impressive. The on-loan Hull City winger caused plenty of trouble on the left flank with a couple of teasing crosses.

Stewart was involved when Charlton took the lead, combining with Rhoys Wiggins before the ball eventually ran through to Wilson in the middle of the area, who fired into the roof of the net.

That prompted Brighton to push further forward, Ashley Barnes heading over when unmarked, before Dale Stephens cleared Ulloa's effort off the line.

Stephens's intervention proved crucial as Kermorgant struck a fine free-kick into the top corner to make it 3-1. Though Ulloa poked in a late second for Brighton following a goalmouth scramble, Charlton held on.

"I'm really pleased for my group of players and especially our fans.

"I felt there was a real positive energy from the players and supporters. Even though we went behind and we were playing against a very good side, who tend to dominate possession.

"We kept or composure and deservedly got an equaliser and performed heroically. There were some big performances from my players."

"We had enough chances to have got something from the game. Charlton set up well took their chances, but sadly we didn't take ours.

"We got the first goal early, which was pleasing but then we didn't really go on from there, that is the most disappointing thing.

"It's one of those things. We have been excellent for the last 10 or 11 games, and we haven't conceded three since the Capital One Cup defeat to Newport [in August]."