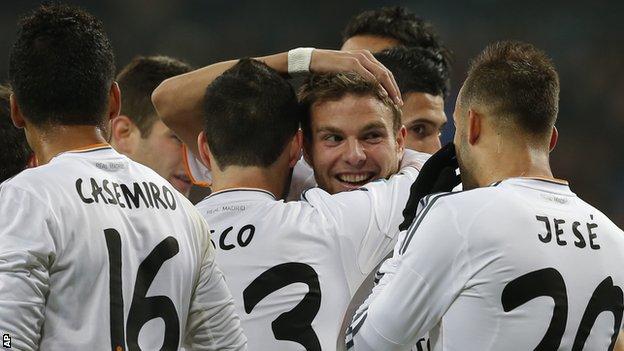 Real Madrid reached the last 16 of the Copa del Rey after defeating minnows Olimpic Xativa 2-0 at the Bernabeu.

Real drew the opening leg 0-0 at the Segunda Division B club, but secured progression through Asier Illarramendi and Angel Di Maria's first-half goals.

Diego Simeone's men held a 4-0 lead from the first leg, but were a goal down until two late goals secured a 2-1 win at the Vicente Calderon.

Atletico will face either Gimnastic or Valencia in the next round of the Spanish cup.

Sevilla were eliminated from the competition after losing 2-1 on aggregate to third-tier Racing Santander, but fellow La Liga sides Real Betis, Real Sociedad and Almeria all progressed.