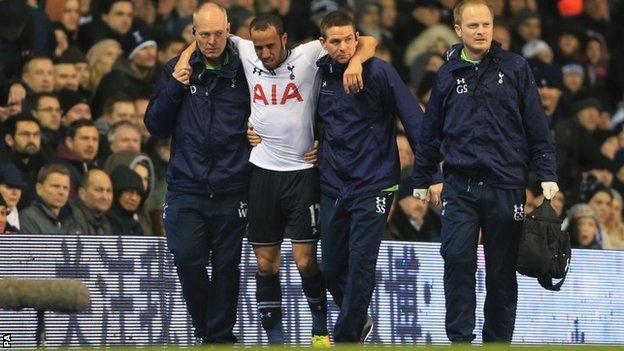 Tottenham are waiting to hear the extent of the hamstring injury suffered by Andros Townsend in Wednesday's Capital One Cup defeat by West Ham.

The England winger, 22, limped off the pitch in the 73rd-minute of the 2-1 quarter-final loss at White Hart Lane.

When asked whether Townsend would be out for a considerable time, Spurs' caretaker manager Tim Sherwood replied: "It looks like it."

It could mean Townsend misses the busy festive programme.

The north Londoners, who are searching for a manager after Andre Villas-Boas' sacking on Monday, have four games between 22 December and 1 January.

Townsend has come to prominence this season at both club and international level.

The midfielder, who has been on loan at nine clubs during his time at Spurs, won his first international cap in September and appeared in subsequent squads, helping Roy Hodgson's men qualify for the 2014 World Cup finals.

He also scored his first goal for his country during the campaign, in the 4-1 win over Montenegro on 11 October.