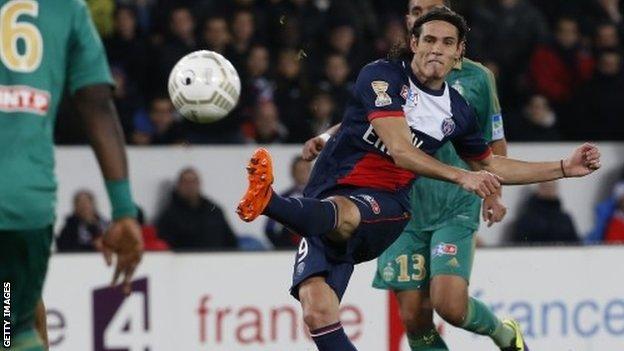 Edinson Cavani scored twice as Paris St-Germain edged into the quarter-finals of the Coupe de la Ligue with a 2-1 extra-time victory over St Etienne.

PSG were without the suspended Zlatan Ibrahimovic but went ahead when Cavani curled in, only for Mevlut Erdinc to score and send the tie into extra-time.

He appeared to be in an offside position but the goal stood and the defending champions were knocked out.

PSG have not won the cup since 2008, when former Bolton and Hull defender Bernard Mendy's stoppage-time goal secured a 2-1 win over Lens.

Elsewhere, Lyon went through with a 3-2 win over Reims, with Bafetimbi Gomis, Alexandre Lacazette and Yoann Gourcuff on target.

There were also wins for Bordeaux, Marseille, Nice, Evian and Troyes, who are the only side left in the competition from outside of the top flight.