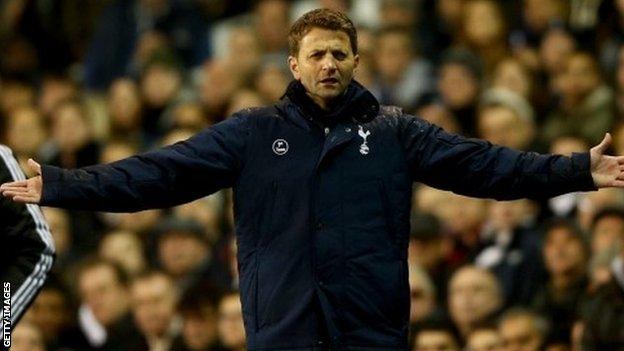 Tottenham caretaker boss Tim Sherwood believes he has "got to be in the frame" for the vacant managerial position at White Hart Lane.

Sherwood, who took over after Andre Villas-Boas's sacking on Monday, will take charge of his first Premier League game away to Southampton on Sunday.

The 44-year-old will remain in control of first-team affairs while Spurs identify Villas-Boas's successor.

"I've got to be in the frame, but it's not my decision," Sherwood said.

"I'm up for a challenge. I always have been. I'm very opinionated."

Former England midfielder Sherwood played for Tottenham between 1999 and 2003.

He joined the club's coaching staff in 2008 under then-manager Harry Redknapp and was working as technical co-ordinator when chairman Daniel Levy asked him to look after the first team following Villas-Boas's departure.

Sherwood has no previous managerial experience, but Spurs rejected an approach by Championship side Blackburn in October 2012 for him to become their manager.

"I know a certain way I need to play," he said. "I think I can manage men and deal with them and be honest with them.

"I think the chairman and the football club need to make the correct decision and find the manager who's best compatible to take this football club forward."

Former England and Tottenham boss Glenn Hoddle has also declared an interest in the position, while Swansea have played down concerns that Michael Laudrup could leave for north London.

While selling Gareth Bale to Real Madrid for a world-record £85.3m, they spent nearly £105m.

Tottenham have won only two of their last seven league games, though, and have only scored 15 goals in total, the fewest of the top 11 sides.

Sherwood suffered defeat in his first game in charge, a 2-1 home defeat by West Ham in their League Cup quarter-final on Wednesday.

"I am trying to get the best out of them - it is difficult to get the message across of how I want to play in a few days," said Sherwood.

"On Monday I was going to take the development team training at 10:20, I then had to change my plans to take the first team."

Tottenham took the lead against West Ham through Emmanuel Adebayor but goals from Matt Jarvis and Modibo Maiga sent the Hammers through to the semi-finals, where they will play Manchester City.

Sherwood said: "We started the game really well. We created chances in the first 20 minutes, but couldn't make the breakthrough.

"Later, we gave it away and encouraged West Ham. They got the breaks in the end.

"Give them credit, they bombarded us and stuck to their task."

"Most of the signings were perhaps suggestions to him, but he agreed to those suggestions," said Ferdinand. "From speaking to AVB, I understand he was happy that the players came to the club."