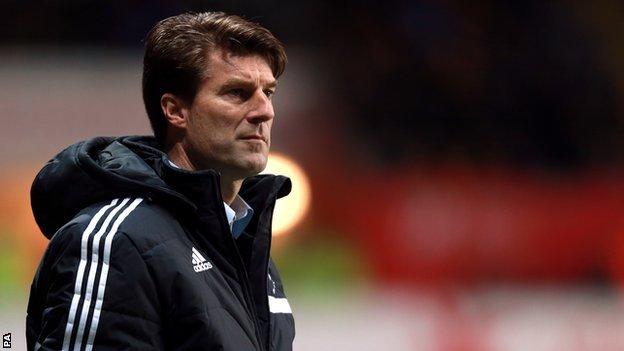 Swansea have played down concerns that Michael Laudrup could leave the club to take over as manager at Tottenham.

City boss Laudrup is among those being touted to succeed Andre Villas-Boas, who was sacked by Spurs on Monday, in the wake of a 5-0 defeat by Liverpool.

However, Swans assistant manager Morten Wieghorst said: "I don't think the club should be worried.

"We've seen in his time here he's been linked with a few vacant jobs and he's said: 'I'm staying'."

We all believe in the manager and know that he's happy at Swansea, he's got a good bunch of players.

Wieghorst added: "Michael has always attracted interest and that's because he's doing a great job [and] because he's a great manager and because of what he's done in the game."

Tim Sherwood has taken charge of Spurs for the short-term although Laudrup is one of a number of names mentioned as a permanent appointment at White Hart Lane.

But the Spaniard added he would not blame Laudrup for leaving if a big club came calling in the future.

"We don't really talk about it," said Rangel on reports linking Laudrup with other jobs.

"We all believe in the manager and know that he's happy at Swansea, he's got a good bunch of players.

"If he decides to move, we'll always give him a great farewell because he's done well for us and for the club.

"We achieved great things last season with him - top 10 in the Premier League and winning the [Capital One] Cup.

"I wouldn't blame him if he wanted to go to bigger club [but] I think he's happy at the moment."