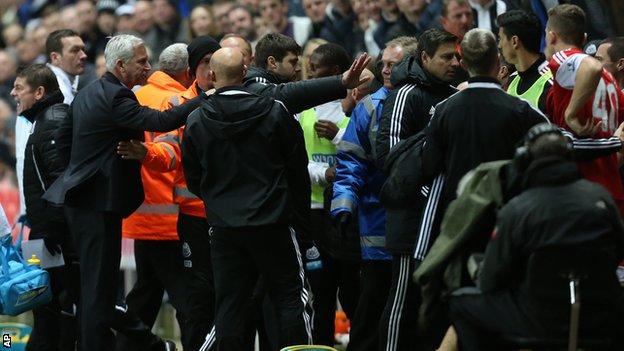 Southampton striker Dani Osvaldo and Newcastle coach Andy Woodman have been charged by the Football Association after the clubs' touchline melee.

Goalkeeping coach Woodman, 42, has been charged with improper conduct after being sent to the stands during Saturday's 1-1 draw at St James' Park.

Osvaldo, 27, faces a violent conduct charge for his role in the incident, which followed a 94th-minute foul on Newcastle defender Massadio Haidara.

Both have until 23 December to respond.

Neither club has been disciplined for the clash, which took place after Saints midfielder Morgan Schneiderlin was shown a yellow card for a late sliding tackle on Haidara.

Staff from both sides were involved, with referee Mike Jones sending Woodman and Southampton counterpart Toni Jimenez from the dug-outs.

Newcastle manager Alan Pardew described the incident as "pretty pathetic" while Saints boss Mauricio Pochettino said: "What happened is not a good example."