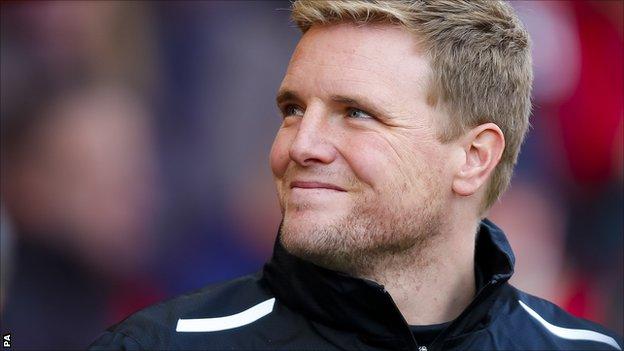 Bournemouth manager Eddie Howe says he is still unsure how much money he will have available to him in the January transfer window.

Howe admits he hopes to improve the squad in January to help address their slide down the Championship table.

He [owner Max Demin] wants to build a club. It's not just concerned with short-term success. All those things mirror my philosophy

But having spent a club-record transfer fee on Tokelo Rantie in the summer, he has yet to learn from owner Max Demin how much he can spend next month.

"Is that money available? I'm really not sure," Howe told BBC Radio Solent.

"There are funds, but how much is a difficult question to answer."

The Cherries are 17th in the Championship following promotion from League One, and Howe hopes to consolidate their position in the second tier of English football with further acquisitions in January.

"We have priority positions," Howe continued. "It's an ongoing process because every window is different and you get a couple of injuries and it throws up different problems for you.

"But we have the type of player in mind to improve. Things change, targets change, you have to be flexible.

"We only signed one player for a transfer fee in the summer. It was a considerable sum and we have to be wise and careful with what we do.

"I'm happy with the squad but would like to improve it again and move into the next phase of our team development."

Howe also says he has the full support of Russian Demin - who has invested heavily on and off the pitch at the club.

"Max has been very good. He is a football man and likes his team to play a certain way and share our ethos," said Howe.

"He wants to build a club. It's not just concerned with short-term success. All those things mirror my philosophy."