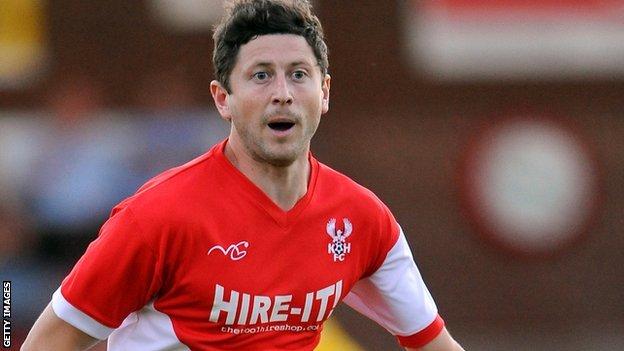 Kidderminster Harriers are weakened for Thursday's trip to Grimsby by the loss of two men - Callum Gittings and Amari Morgan-Smith - through suspension.

Striker Morgan-Smith was sent off for a second bookable offence in last Saturday's 3-1 home defeat by Alfreton.

Midfielder Gittings serves a one-game ban too, having picked up his fifth caution of the campaign.

Steve Burr's promotion-chasing Harriers go into the trip to Blundell Park on the back of two straight defeats.

But, after losing 1-0 at Woking last Tuesday night, Burr blamed Morgan-Smith's red card as the turning point in Saturday's defeat - a decision he dubbed as "unbelievable", coming just a minute before former Harriers striker Michael Wylde scored his second goal of the afternoon to put Alfreton in front.

Steve Burr's Harriers have not lost three successive games since their nightmare start to last season, when they lost all of their first five

"The major point in the game was the sending off and them scoring straight away after that," Burr told BBC Hereford & Worcester.

"But we're conceding too many sloppy goals at the minute. And we had enough chances to have put that game out of sight.

"At half-time, I just could not see us losing that game but it just shows how certain incidents can change things."

The loss of the in-form Gittings, whose goal at Aggborough on Saturday took his current scoring streak to five goals in as many games, will be felt as keenly as that of Morgan-Smith.

But, after just one goal in two games, following a glorious run of 30 in 12 matches in which the Harriers have five times hit four or more, Burr does have other attacking options, chiefly last term's top scorer Anthony Malbon.

Meanwhile, the Harriers have rearranged their home game against Dartford - which was due to be played on FA Cup third-round day - for Tuesday, 21 January.