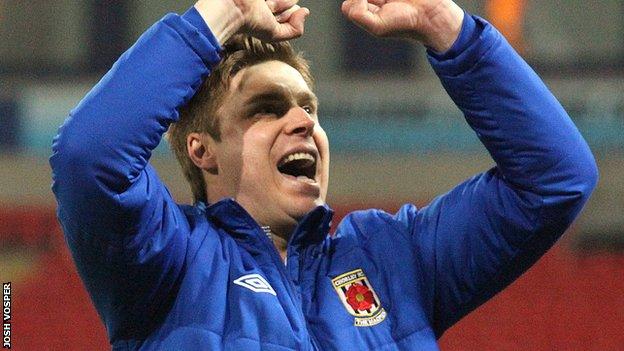 Manager Garry Flitcroft says Chorley are "not far off" Conference Premier standard after knocking Forest Green out of the FA Trophy.

The Northern Premier League side won on penalties at the New Lawn after two 0-0 draws against Adrian Pennock's Rovers.

"It's always nice going to nice grounds, playing teams like Forest Green and seeing where we are," Flitcroft told BBC Radio Lancashire.

"From Tuesday night, my lads aren't far off it. All credit to them."

Flitcroft's side will now face another Conference Premier team, Tamworth, in the last 16.

"Anything can happen now," continued the 41-year-old former Manchester City and Blackburn midfielder. "We know we can beat anyone if we're right.

"They're struggling a bit in their league and we're flying high. We'll be underdogs again, but we probably like being underdogs at the minute."

Chorley are second in their division - the seventh tier of English football and two leagues below the Conference Premier. They lie two points behind leaders Skelmersdale with three games in hand.

"I've been putting a squad together over the last three years and this is the best squad I've had as far as team spirit and togetherness goes," Flitcroft added. "They know where we want to be."