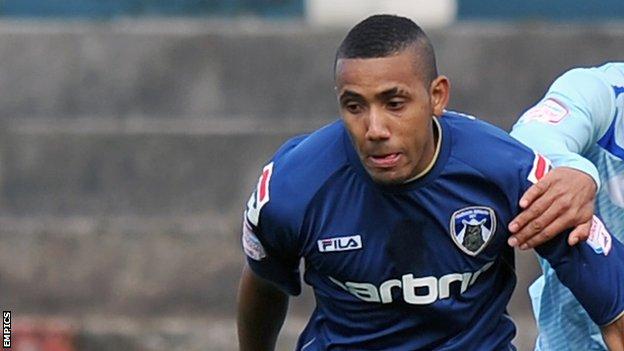 Cristian Montano "vehemently denies" any involvement in spot-fixing after being sacked by Oldham on Monday.

The winger, 22, was one of six people arrested and bailed as part of an investigation into spot-fixing by the National Crime Agency, which was acting on information from a Sunday newspaper.

He was suspended by the League One club following the initial allegations.

In a statement released on Wednesday, the Colombian's solicitors have said he will appeal against his dismissal.

Montano joined Oldham in August 2012 and made 48 appearances for the club, scoring four goals.

When confirming Montano's departure, a Latics statement read: "After a thorough investigation carried out by Oldham Athletic Football Club relating to the conduct of Cristian Montano, a decision has been made by the board to dismiss the player forthwith.

"Oldham Athletic take matters such as this extremely seriously and believe it was essential to act as swiftly as possible."

But the player's solicitor said Montano denies any wrongdoing and adds that he will fully co-operate with the ongoing criminal investigation.