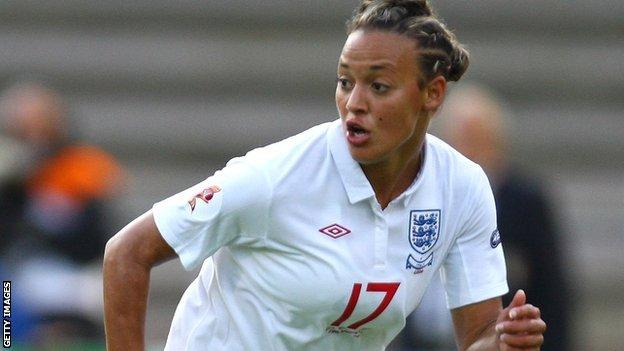 The Boston Breakers forward, 25, quit playing for her country in 2010 after a fall-out with former coach Hope Powell.

Arsenal winger Rachel Yankey is not included in the party while skipper Casey Stoney has a foot injury and will not make the trip to Spain next month.

England face Norway on 17 January before the Cyprus Cup in March.

Sampson said: "All players and coaches want to play games. I'm really excited to play a game. It's a full international but we have to be realistic as to where we are as a group at that stage.

"The important thing for me is to get to see the players in a football match. I'm delighted we've got the opportunity to play a game."

Sanderson was a prolific scorer for Arsenal and Chelsea before heading to the United States with Philadelphia Independence.

Who is Lianne Sanderson?

She decided to stop playing for England aged 22 after travelling back from the US for an international fixture, only to be left out of the team.

At the time she claimed it was "personal". She has already won 29 caps, scoring eight goals.

Sampson, who was named as new head coach earlier this month, will lead England as they resume their 2015 World Cup qualifying campaign with a home fixture against Montenegro on 5 April.

England top their group after winning their first four matches without conceding a goal.