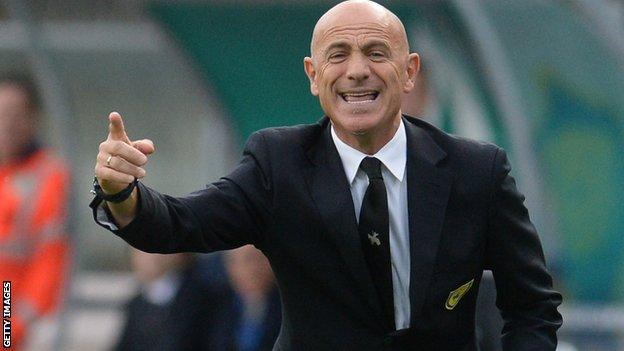 Sannino, 56, has never previously worked outside of Italy and Watford is his 13th managerial role, having also taken charge of clubs including Siena, Palermo and Chievo Verona.

The Italian will be joined by assistant coaches Francesco Troise, Giovanni Cusatis and Paolo De Toffol.

Who is Beppe Sannino?

Watford are currently 13th in the Championship table.

The club later confirmed assistant coaches Dodo Sormani and Bastiano Porcu had left the club and would not be working alongside Sannino.

Zola's departure on Monday followed a run of just one win in 10 matches, including five straight home defeats.

When the Italian Pozzo family took over at Vicarage Road in June 2012, their stated aim was to take the Hornets back up to the Premier League and they named the former Chelsea and Italy forward as manager shortly after buying the club.

They narrowly missed out on promotion under Zola last season, finishing third and losing the play-off final against Crystal Palace 1-0 thanks to Kevin Phillips's extra-time penalty.

With the club now 17 points below leaders Queens Park Rangers and eight points away from the play-off places, Sannino will be expected to turn the team's form around, starting at Ipswich on Saturday.

His coaching career began in the 1990s, but he had to wait until 2011 for his first chance in Serie A, when he was appointed by Siena.

He then moved on to Palermo, who subsequently sacked and re-hired him in the space of six months, and most recently had only four months with Chievo before being relieved of his role.

Sannino's arrival at Watford continues the club's close ties with Italian football, where the Pozzo family also own Serie A side Udinese.

Last season, they took advantage of the connection, bringing in 10 Udinese players on loan, which prompted a tightening of the rules surrounding overseas loans by the Football League.