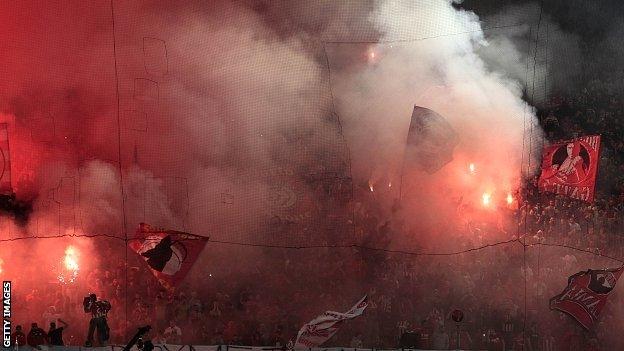 Olympiakos will play the first leg of their Champions League last-16 fixture against Manchester United in a partially-closed stadium.

Uefa has ordered the closure for "the racist conduct of supporters", setting-off fireworks and the use of a laser during a group stage match at home to Anderlecht on 10 December.

The club was also fined 30,000 euros but is appealing against the decision.

Zenit St Petersburg will also have to close part of their stadium for their home leg against Borussia Dortmund.

The Russian side have been punished by Uefa for the racist behaviour of their fans, the throwing of fireworks and crowd disturbances during their 4-1 defeat at Austria Vienna.

He added: "There was no racist slogan or racist banner, and no racist chanting or songs were heard during the match with Anderlecht. We have submitted an appeal to try to ensure that our stadium is full for the match against Manchester United."