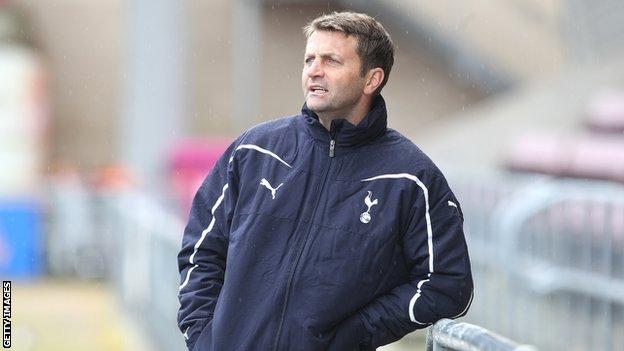 Caretaker boss Tim Sherwood hopes to make an immediate impact when Tottenham take on West Ham in the Capital One Cup quarter-final.

Spurs lost 3-0 to West Ham in October, one of several disappointing home results that led to the sacking of Andre Villas-Boas.

"When you lose your manager, it's a change and you've got to listen to a different voice," Sherwood, 44, said.

"But I'm hoping to get a few messages across in a short space of time."

Sherwood, who is already at the club as a technical co-ordinator, has taken charge for the short term, but could see his role extended.

Ex-Spurs midfielder Sherwood, who also played for Norwich and Blackburn Rovers where he won the Premier League, told Spurs TV: "It's a huge game, especially on the back of what they did to us at the Lane. It was disappointing.

"We have to get out there on the front foot and we have to impose ourselves on them as soon as we can during the game."

Tottenham are hoping to overturn a run of home results which has seen them win one of their last six Premier League games at White Hart Lane.

Sherwood hopes the Hammers, who are a point off the Premier League relegation zone ahead of a busy Christmas period, will have their focus elsewhere.

"Hopefully they've got their concentration on Premier League safety rather than the cup tomorrow night," he added.

"We have to be patient. They got bodies behind the ball and tried to catch us on the counter-attack.

"We're aware of that. Let's just hope we can impose ourselves on them nice and early, get the crowd behind us and really be up and at them."