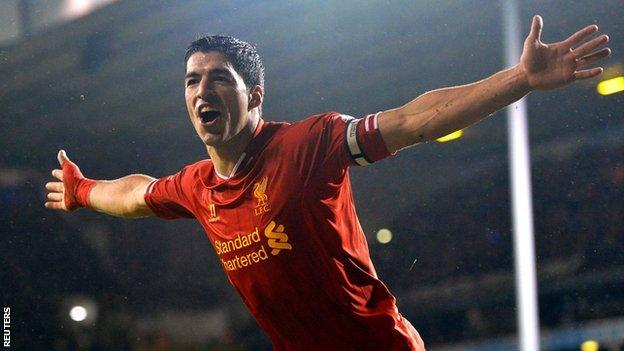 Liverpool have opened talks with Luis Suarez's agent over a deal that could make the Uruguayan striker the highest-paid player in the club's history.

24 April: Banned for 10 games by the Football Association for biting Chelsea's Branislav Ivanovic

29 May: Drops a big hint he wants to leave Liverpool by saying he finds life in England hard

12 June: Reiterates his love for Liverpool, but insists life in England is very hard

8 July: Liverpool turn down a £30m bid from Arsenal

2 August: Sources say Suarez will consider a formal transfer request and the possibility of court action if dispute with Liverpool is not resolved

7 August: Suarez says he wants to leave Liverpool to join a Champions League side

8 August: Told to train alone by manager Brendan Rodgers, who says the player has shown "total disrespect" for the club.

Managing director Ian Ayre returned to Merseyside on Tuesday having spent 24 hours in Spain, where he held talks with Suarez's agent, Pere Guardiola.

Liverpool's owners have sanctioned the deal but it remains to be seen whether Suarez, 26, is willing to commit beyond 2016, when his current contract ends.

Real Madrid retain an interest in him.

But Reds manager Brendan Rodgers said recently: "He is really happy here. He is playing with a smile and enthusiasm. The whole profile of the club fits him perfectly. The supporters idolise him and you can see the connection there."

It may take a contract offer of close to £200,000 per week, double Suarez's present deal, to persuade him to sign a new contract. However his relationship with leading figures at Anfield has improved significantly since he attempted to force a move to Arsenal in the summer.

The Gunners made two bids for the Uruguay international, including a club-record offer of £40m plus £1 in an attempt to trigger a release clause in his contract.

Both were rejected, with Rodgers accusing Arsenal of "playing games".

Suarez was considering submitting a formal transfer request and the possibility of court action if the dispute was not resolved as he believed the second bid triggered a clause in his contract that allowed him to leave the club, whom he signed for in January 2011 for a fee of £22.7m.

Suarez was initially made to train alone during pre-season, but returned to the first-team fold on 16 August after talks with Rodgers.

He missed the first six games of the season after being given a 10-match ban in April for biting Chelsea defender Branislav Ivanovic, but returned against Manchester United on 25 September and has scored 17 goals in 12 games.