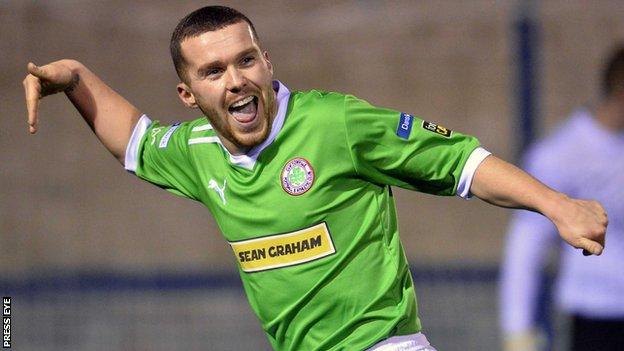 Holders Cliftonville progressed to the League Cup final as they defeated a battling Ards side at Clandeboye Park.

Mark McClelland missed a great early Ards chance before Martin Donnelly curled the Reds ahead with a 26th-minute free-kick.

Joe Gormley doubled Cliftonville's lead on the stroke of half-time after a mistake by Ards keeper Graeme McKibbin.

Faulkner caused problems for Cliftonville full-back Eamonn Seydak in the opening stages and the winger set up a glorious early chance but McClelland headed wide from six yards.

The miss was punished soon afterwards as Donnelly curled in his free-kick from the edge of the box after he himself had been fouled by Stephen Gordon.

Craig McMillan then went close for Ards with McKibbin making a fine save to deny Boyce at the other end.

However, McKibbin was at fault for Cliftonville's second goal on the stroke of half-time as he dropped a seemingly harmless ball into the box which allowed Gormley to fire in from close range.

To their credit, Ards attempted to rally in the second half with Faulkner at the centre of most of their best work.

Faulkner was just off target and then set up a chance for Davison but the former Lisburn Distillery man was denied by Conor Devlin.

Winger Faulkner then found himself with only Devlin to beat as he had the best Ards chance of the second half but the Reds keeper was able to block the weak effort.

As gaps began to appear in the Ards defence in the closing stages, Boyce wasted a couple of late Cliftonville chances but the holders had done their job on the night.