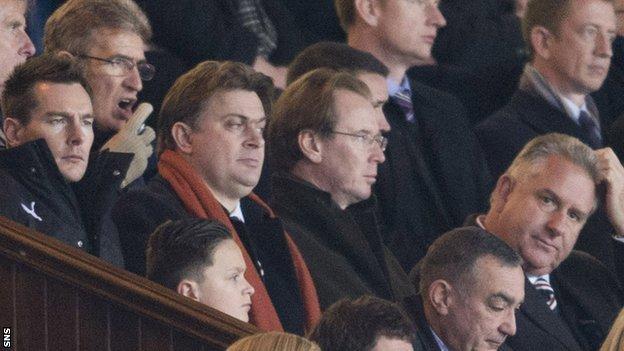 The current Rangers board has won enough support to remain in place, BBC Scotland has learned.

And nominees including former chairman Malcolm Murray do not have enough votes to join the board.

The towards Thursday's annual general meeting.

In recent months, the club has appointed and non-executive director Norman Crighton to join finance director Brian Stockbridge and James Easdale on its plc board.

Shareholders former Rangers director Paul Murray, Scott Murdoch and Alex Wilson have been seeking election to the board.

Indeed, the Murrays, Murdoch and Wilson won a court decision to have their nominations added to the AGM agenda, resulting in the meeting being delayed until 19 December.

After that verdict at the Court of Session in Edinburgh, Paul Murray called on Stockbridge and then chief executive Craig Mather to resign.

Mather did resign but Stockbridge has been backed by chairman Somers.

The club reported a £14m operating loss for the 13 months to June after around £22m was raised in a share issue late last year.

Responding to the latest developments, Paul Murray said: "We are surprised to see information of this nature leaked to the BBC.

"This information could only have come from one of two sources - Capita or the Rangers board. We regard this as a serious breach of Stock Market regulations and we intend having our legal team look at the matter on Wednesday morning.

"In the meantime we would urge all Rangers shareholders and fans to ignore this propaganda, turn up on Thursday, cast their votes and ask the questions they want their board to answer."

On the pitch, Scottish League One leaders Rangers are yet to drop a point in the division so far this season and Ally McCoist's side have also progressed to the final of the Ramsdens Cup and the fifth round of the Scottish Cup.