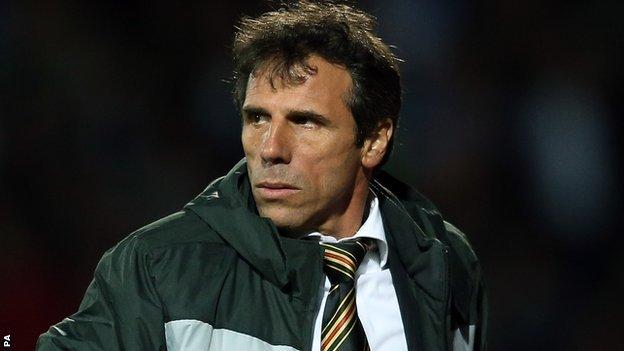 Gianfranco Zola would be a good choice as West Bromwich Albion's new boss after leaving Championship side Watford on Monday, says Frank Sinclair.

The 47-year-old former Chelsea and Italy forward is understood to be near the top of a list of candidates that also includes Martin Jol and Andre Villas-Boas, reports BBC WM.

"The way Gianfranco likes his teams to play is the same way West Brom play."

Albion also have Paul Clement, brother of former Baggies favourite Neil, on their radar, following the job he has done as part of Carlo Ancelotti's backroom team, first at Paris St Germain and now with Real Madrid.

Villas-Boas and Jol, sacked by Tottenham and Fulham respectively, have more recent top-flight experience than Zola, who made a shock departure from Vicarage Road on Monday after nearly leading them to promotion last term, but he managed West Ham in the Premier League from 2008-10 where he proved popular with the fans.

"When he was at West Ham the club were not in a very stable state, and Watford are in a better place now than when he took over," said former defender Sinclair, who had a loan spell with Albion early in his career.

"Gianfranco thought it was better for himself and the club that they went their separate ways.

"He was frustrated with the way things were going and how far he could take them this season, but you don't become a bad manager overnight.

"He's a very happy-go-lucky type of character. He was an unbelievable player, but he's so down to earth, even after the career he had - and his man management skills are excellent."

Sinclair is open-minded as to whether Albion made the right decision in parting company with Clarke, another of his old Chelsea team-mates.

"When West Brom won at Man U, they were saying how well he was doing. Six games later, he's out of a job.

"Managers these days don't get the time they need. But, if over the first quarter of the year, they stay in the sort form they're in now, West Brom would almost certainly get relegated.

"A point a game is not good enough to keep you in any league, and a new manager coming in can have an effect."