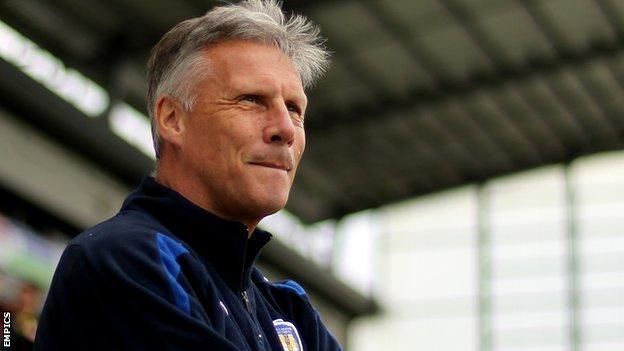 Bristol Rovers manager John Ward will be given time to turn around the League Two club's fortunes, according to chairman Nick Higgs.

Tuesday marks a year since Ward returned to the Memorial Stadium for a second spell in charge.

And Higgs told BBC Radio Bristol: "John is here for the long haul."

The 62-year-old led them to a mid-table finish last season, but they are now 22nd, only one place above where they were when he took over.

Higgs continued: "We brought him back in to rebuild the side and that's what we're doing.

"We'll take stock in January but there's no thought of any changes. We want to build the club on a stable footing."

Ward's first spell with Rovers ran from 1993 to 1996 when they played in what is now League One.

He managed to guide them to a top-half finish each season, even achieving a play-off place in 1995.

Since his return, he has won 17 out of 49 games, but only five have come this season, and Rovers are currently only one point above the drop zone.

"We're disappointed because in 12 months our league position hasn't changed, but the positive aspect is our performances on the pitch have improved," added Higgs.

"John did a fantastic job at the end of last season. He stabilised things and gave us a strong finish.

Ward, who signed a new contract in April, has relied heavily on his youth-team players to bolster his squad this season and seven were included in Saturday's defeat by Morecambe.

But Higgs believes the older players must start shouldering some responsibility for their form.

"We've spent a lot of money building up our youth department and there's eight or nine of those players in the first-team squad now," said the Rovers chairman.

"Where we've lacked is among some of the senior players. They haven't performed in front of goal.

"It's something we've got to address in January and I'm already in discussion with the manager about it."