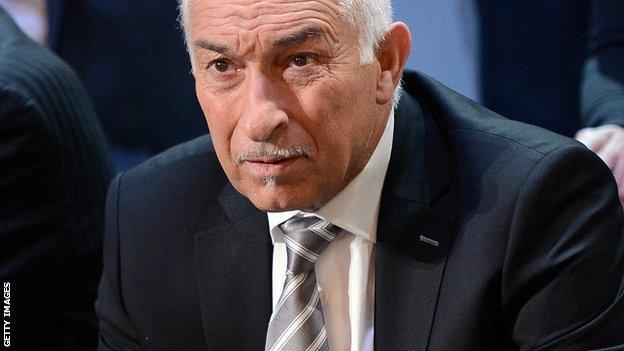 Football faces a legal challenge that could result in the end of transfer fees and have as big an impact on the game as the landmark Bosman ruling.

The transfer system fails 99% of players around the world, it fails football as an industry and it fails the world's most beloved game

And it is preparing to challenge the system in the European courts.

"Footballers are workers, and only when they enjoy the rights enjoyed by all will Fifpro be satisfied," said the union's president, Philippe Piat.

The Frenchman added his organisation would not "stand by and watch from the sidelines as football players' rights around the world are systemically disrespected and the football industry dismantles itself".

If successful, the move could allow players to serve notice on their contracts as other workers can.

In theory, that would mean a player would be able to tell his club he wanted to leave and hand in his notice. Another club could then pay up the remainder of the player's contract and he would be able to join them without a transfer fee being paid.

"Nothing will happen fast, but this move underlines just how vulnerable sport's status quo is to challenges based on European law. Quite simply, professional footballers do not enjoy the same freedoms that almost every other EU worker does. The clubs say this is for good reason, and warn of unintended consequences if decades of custom are ripped up. But the players look at US sport, and wonder why their career prospects are still constrained by transfer fees and compensation costs."

Fifpro wants the European courts to review the entire football transfer system and says it has told both world governing body Fifa and its European counterpart Uefa of its intentions.

The union claims the regulations impede players' freedom of movement. It is also against third-party ownership and what it claims is the unfair distribution of wealth, with clubs able to make huge amounts of money from transfer fees and compensation payments when players move.

Fifpro argues only agents and the richest clubs benefit from the transfer system. It also claims thousands of players around the world are not paid on time and become vulnerable to criminals looking to fix matches.

Piat said a review of the transfer system was his "top priority" when elected Fifpro president in October.

"The transfer system fails 99% of players around the world, it fails football as an industry and it fails the world's most beloved game," he added.

Fifpro, which represents more than 65,000 footballers, said it would take its recommendations and complaints to the European Commission, the European Court of Justice and human rights courts if necessary.

Formed in 1965 and based in the Netherlands, Fifpro is a worldwide body that represents more than 65,000 professional footballers

In 1995, the Bosman ruling - named after Jean-Marc Bosman, the Belgian player who brought the case before the European Court of Justice - had a major impact on football in the European Union (EU).

It banned restrictions on foreign players from the EU within national leagues and allowed players in the EU to move to another club at the end of a contract without a transfer fee being paid.