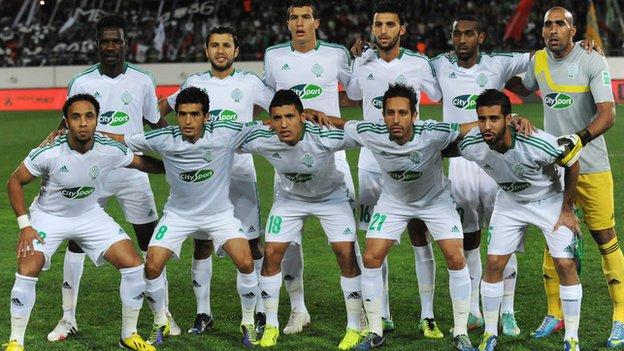 Moroccan champions Raja Casablanca know they will have one advantage over Brazilian side Atletico Mineiro when the clubs face each other in the semi-final of the Club World Cup and that will be the backing of a partisan and vociferous crowd.

The two sides clash in Marrakech on Wednesday and a huge number of Raja fans are expected to turn up - 35,000 of them attended first two games of the tournament in Agadir.

Raja's reserve keepeer Brahim Zaari is in no doubt the fans have helped the side reach the last four.

"They've inspired us very much because if we are at a dead point in the game they help us keep running not to be tired," he told BBC Sport.

"They've supported us in a great way and I am proud of them."

Not only do the Raja fans sing, dance and chant all they way through every game they also take time to organise their own tributes.

Ahead of both games, fans' associations planned and laid out different coloured cards that have been placed on seats at one end of the stadium and on a given signal the cards were held up to spell out a word of encouragement.

In the match against Monterrey the word was "Vamos" the Spanish for "Let's Go".

And that kind of inspiration lifted Raja in both their opening games to late victories.

In the first game it was an injury-time winner that gave them a 2-1 win over New Zealand's Auckland City and then against Mexico's Monterrey extra-time was needed to secure another 2-1 victory.

Ivorian Kouko Guehi headed home the winner over Monterrey and he is in awe of the fans.

"They are the best in the world," he said. "They are 'mad' and they follow us all the time and even when we are in a difficult place they support us and sing on and on."

The organisers of the Club World Cup will be pleased with Raja's progress as it almost certainly ensures big crowds for the final two match days of the tournament.

Even if Raja lose on Wednesday they will play again on Saturday in the third place play-off match ahead of the final in Marrakech.

There will also be the added bonus of European champions Bayern Munich playing one way or another on Saturday, too - the Germans face China's Guangzhou Evergrande on Tuesday in their semi-final.

The dream scenario for the hosts would be a Raja v Bayern final.