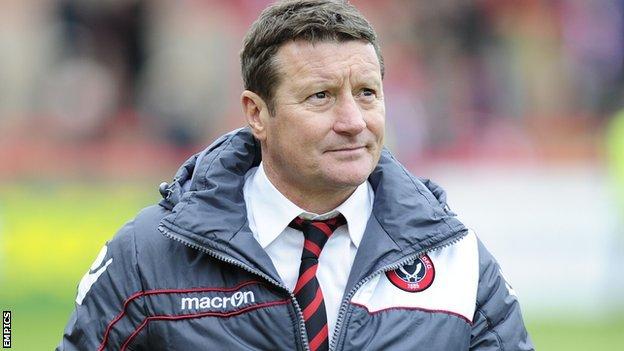 Barnsley have reappointed Danny Wilson as their manager, 15 years after he left the club.

The Reds sacked David Flitcroft last month after slipping to the bottom of the Championship.

Wilson began his managerial career at Oakwell and guided the club into the top flight of English football for the first, and only, time in 1997.

"It's fantastic to be invited back," said the 53-year-old, whose contract details have not been disclosed.

"They've been very unlucky in lots of games [this season] and overall there isn't a great deal wrong here.

"The situation is totally different to when I was here before and I know what happened then counts for nothing now."

Wilson confirmed that Micky Mellon, who has been caretaker since Flitcroft's departure, will stay on as assistant manager.

The first match of his second spell in charge will be at Leeds on Saturday.

Managers currently in at least their second spell in charge of a club in the top four divisions in England:

Wilson initially joined Barnsley in 1993 and stepped up to become player-manager the following year after Viv Anderson's departure.

He took the club to the Premier League three years later, but they suffered relegation the following season and he left to take charge of local rivals Sheffield Wednesday in July 1998.

Former chairman John Dennis, who appointed Wilson for his first spell in charge, believes the club have made a good decision in bringing him back.

"I think it's great news for the club and everyone connected with the club will have a chance to get behind a very popular figure," he told BBC Radio Sheffield.

"He's strong, he's determined and I think he will lift the spirits of everybody there.

"It'll be lovely to see him back and if he has half the impact that he had last time then that might be enough to get us out of the mess we're in."

After his spell at Hillsborough ended in March 2000, the former Northern Ireland international went on to have spells with Bristol City, MK Dons, Hartlepool and Swindon before returning to South Yorkshire with Sheffield United in May 2011.

Wilson took the Blades to the League One play-off final in his first season in charge, but was relieved of his duties in April with the club six points outside the automatic promotion places.

Barnsley are currently at the foot of the Championship table, having won only three of their 20 league games so far this term.