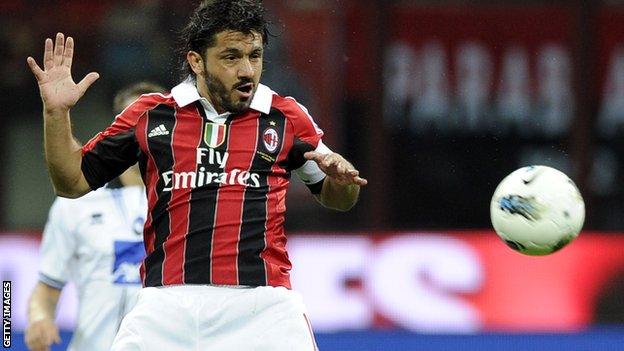 Four other people have been detained in connection with the alleged fixing of matches in Serie A three seasons ago.

Ex-Rangers star Gattuso, 35, is retired and was sacked by Serie B side Palermo after just six league games as manager.

He won two Serie A titles and two Champions League crowns during his 13-year spell with Milan and also the 2006 World Cup with Italy in Germany.

Gattuso took charge of Palermo in the summer after being sacked by Swiss side Sion but won just two games and has been replaced by Giuseppe Iachini.

Cremona prosecutor Roberto Di Martino told AP that Gattuso and retired Milan and Lazio player Cristian Brocchi were allegedly part of a group that fixed Serie A and other matches at the end of the 2010-11 season.

A wide-ranging criminal and sporting probe into illegal betting and match fixing in Italy has already led to several arrests and bans.

Juventus manager Antonio Conte was suspended for 10 months for not reporting match fixing when he was in charge of Siena, then in Serie B, in the 2010-11 season.