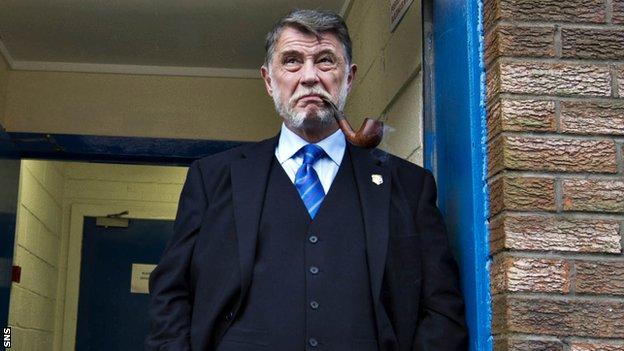 Cowdenbeath chairman Findlay said: "The squabbling has gone on too long.

"It's time to clear the whole lot out and only have people in who want to take the club forward and who do not want to take a penny out of it."

If you sit on the board of Rangers, you should not be taking a penny out of it, even if it's just to buy a blazer

- brother of plc director James and the new chairman of the club's football board - stressed last week that he does not take a wage from the club.

But finance director Brian Stockbridge is paid an annual salary of more than £200,000, while former chief executive Charles Green earned £933,000 during his 13 months at the helm.

Stockbridge has handed back a £200,000 bonus awarded to him after the club won the Scottish Third Division title last season.

However, QC Findlay said: "If you sit on the board of Rangers, you should not be taking a penny out of it, even if it's just to buy a blazer.

"They need to get people in there who have the best interests of the club at heart and who are capable of running Rangers in the way Rangers should be run.

"Someone who is the club's internal accountant should be paid the commercial rate if you are going to get the right guy. Of course he should.

"But, frankly, the notion that a financial director should be given a £200,000 bonus for winning the Third Division is ridiculous. Absolutely ridiculous. And that tells me that whoever made that decision should not be running Rangers Football Club."

Findlay insists he does not know personally any of the disgruntled shareholders who will seek election to the board - former director Paul Murray, former chairman Malcolm Murray, Scott Murdoch and Alex Wilson.

"But the AGM has to ensure that the people who come in are prepared to speak publicly, to be scrutinised by the supporters or anyone else that wants to scrutinise them, to put in all their time and effort to put Rangers Football Club back where it should be and to say that they will not take a penny from the club, neither now nor in the future," said Findlay.

"If someone has a job then you pay them the going rate. But, as for the directors, they should not be taking a penny out of that club as far as I'm concerned."

Rangers raised £22.2m when the club was listed on the London Stock Exchange in December.

However, they posted a £14.4m loss during the 13-month period to June and Stockbridge has already gone on the record to admit that the Glasgow club could be down to their last £1m by April.

"The people responsible for what Rangers Football Club has done to itself and the embarrassment and distress it has caused its supporters should be ashamed of themselves and should not be allowed anywhere near it.

"These people do not own Rangers - it does not belong to any one person.

"They may be in charge for the time being, but the club belongs to the people who support it. They are the only ones who matter, nobody else."