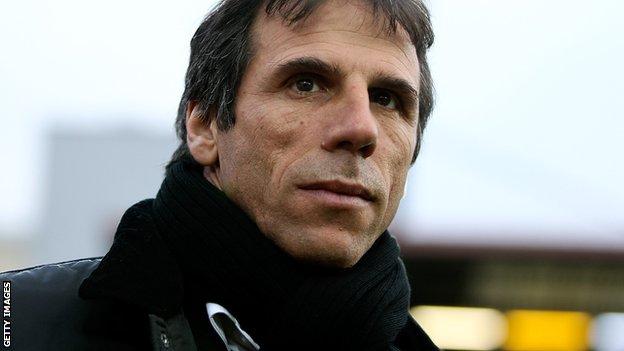 Gianfranco Zola has resigned as head coach of Watford with the club 13th in the Championship table.

The 47-year-old Italian arrived at Vicarage Road in July 2012 and led them to the Championship play-off final last season, losing to Crystal Palace 1-0.

But Watford have lost their last five home games and last won in October.

"I feel that it's in the best interests of the team that somebody new is given the chance to bring the success we have hoped for," Zola said in a statement.

"It is for a variety of reasons, and not just over one matter or one moment, that I feel this is the right decision for me, in the best interests of the club."

Former Chelsea and Italy striker Zola was brought in shortly after the Italian Pozzo family acquired the club in June 2012.

His only previous management experience came at West Ham in a two-year spell between September 2008 and May 2010.

Zola's appointment at Watford was part of the Pozzo's ambitions to take the club back to the Premier League, with the family already owning Udinese in Italy's Serie A and Granada in Spain's La Liga.

During Zola's first season in charge, Watford took full advantage of the unlimited number of overseas loan players allowed, bringing in 10 players from Udinese over the course of the season.

The policy drew criticism from opposition managers and led to a change in Football League rules, limiting the number of overseas loans to five.

With the help of the loan signings, the Hornets finished third in the Championship table, but after a thrilling last-gasp play-off semi-final win against Leicester, they lost the final at Wembley thanks to Kevin Phillips's extra-time penalty.

Zola added: "Last season was such an amazing time, for the players, the staff and the supporters. And I loved that journey. Every minute of it brought a new challenge, different experiences and a lot of learning.

"But this game does not wait and does not stop.

"There is always the next challenge and a new environment ahead which means nothing is ever the same."

Zola admitted after Saturday's 1-0 defeat against Sheffield Wednesday at Vicarage Road that he would be considering his future at the club.

The defeat came during a poor run of form that had seen the club drop from fifth to 13th in the Championship.

A club statement said: "It is with great sadness that the board of Watford Football Club has accepted the resignation of head coach Gianfranco Zola.

"Watford FC wishes to place on record its sincere gratitude to Gianfranco for his achievements at Vicarage Road, and for always acting with the utmost dignity and grace.

"The board fully respects his decision and Gianfranco will be welcome at Watford Football Club at any time in the future."