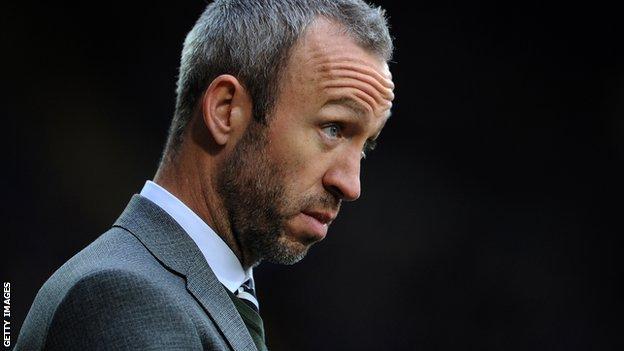 Manager Shaun Derry admits Notts County's emphatic win that lifted them off the bottom of the League One table came as a surprise.

Saturday's 4-0 victory at Colchester was the Magpies' first away from home in all competitions this term.

It was also the first time Notts have recorded back-to-back triumphs.

"I didn't see 4-0 coming to be honest - what I saw and expected was a positive result.," 35-year-old Derry told BBC Radio Nottingham.

I've never seen Boucaud play like that, he needs to go and replicate those performances every week.

"We needed to back last week up as well. It is all well and good winning, but you can't go back and rest on your laurels.

"We needed to take advantage of the position we found ourselves in, and needed to win."

Victory lifted Notts above both Bristol City and Crewe Alexandra in the table and moved them to within four points of the U's in 18th place.

Derry said the Magpies have set themselves new standards, and singled midfielder Andre Boucaud out for special praise.

"I've never seen Boucaud play like that, he needs to go and replicate those performances every week because the lad really has ability," said Derry.

"I thought the back four were fantastic, [captain Gary] Liddle was sound in the middle of the park and the forward four were very inventive."

Bristol City, who were sent to the bottom of the table after their 2-1 home loss to Rotherham, travel to Meadow Lane on Saturday.