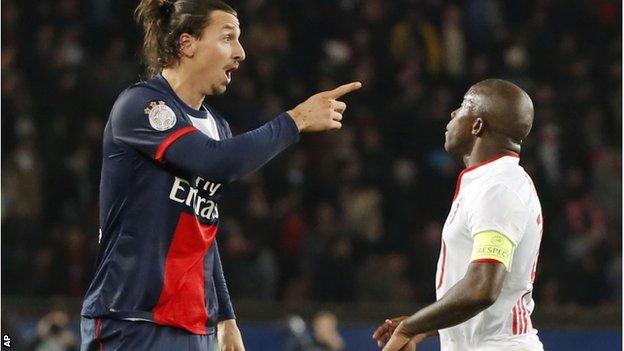 French leaders Paris St-Germain needed a second-half own goal to salvage a draw against third-placed Lille in a thrilling game at the Parc des Princes.

Laurent Blanc's team earned a deserved point when Lille defender Marko Basa bundled a home corner into his own net.

Zlatan Ibrahimovic's deflected free-kick put PSG ahead before the visitors equalised when skipper Rio Mavuba steered in from close range.

The Montenegrin international was left helpless as the ball cannoned off his leg into an empty net after Lille goalkeeper Vincent Enyeama flapped at the set-piece.

Defending champions PSG may feel they have missed an opportunity to take advantage of second-placed Monaco's shock home defeat by Valenciennes on Friday.

And the home crowd were aggrieved that Lille midfielder Mavuba was not shown a red card for shoving Ibrahimovic in the face, just moments before his equaliser.

But the hard-fought draw did move PSG three points ahead of the Principality side going into Ligue 1's winter break.

The French top-flight programme resumes on 8 January, with PSG back in action three days later at Ajaccio.

Lille, who are now a point behind Monaco, host Reims on 12 January.