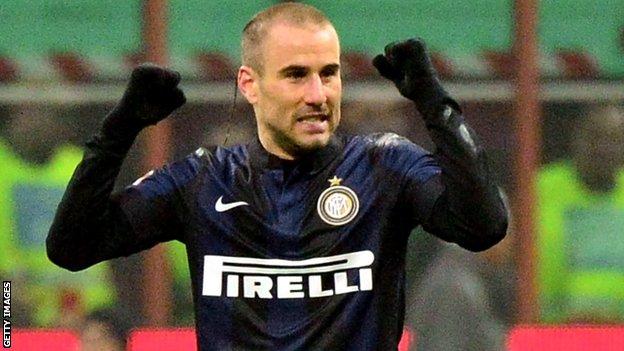 A poor game between the two former European powerhouses was heading for a goalless draw when Palacio turned in Fredy Guarin's cross.

Milan's Andrea Poli had earlier wasted a chance to give his side the lead when he blazed over from a good position.

They finished with 10 men after Sulley Muntari's lunge on Zdravko Kuzmanovic.

Milan can have few complaints and were fortunate when Inter had a strong penalty claim turned down shortly before the interval after a clumsy challenge from Cristian Zapata on the dangerous Palacio.

Massimiliano Allegri's side head into the short winter break with one win in the last nine league games.

Tale of the two Milan clubs

They started brightly with Mario Balotelli threatening his former club in spells before Kaka almost broke the deadlock with a low shot from 16 yards which Inter goalkeeper Samir Handanovic failed to gather at the first attempt.

Midfielder Poli was presented with a glorious opportunity after Handanovic made a mess of a corner, but he failed to keep his composure and blazed over the bar.

Inter, now up to fifth in the table, were denied a penalty following Zapata's foul on Palacio before Muntari's ugly challenge on Brazil-born Jonathan which the referee failed to spot.

The game needed a moment of quality and Palacio provided it in the 86th minute, the Argentina forward firing home from close range after Guarin's cross.

Muntari pressed the self-destruct button as his shoulder barge on Kuzmanovic earned the former Portsmouth midfielder a red card.