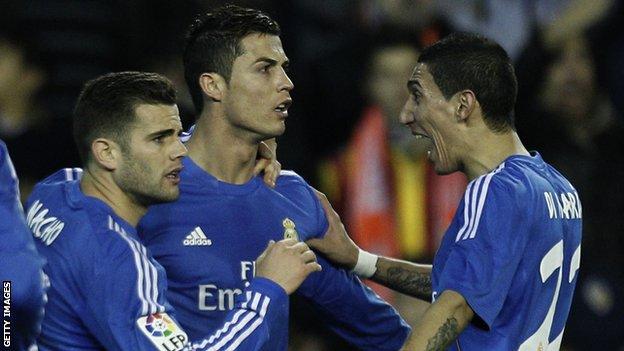 Gareth Bale was missing for third-placed Real after failing to recover from a calf injury and his replacement Angel di Maria opened the scoring.

Pablo Piatti headed in an equaliser for managerless Valencia before Cristiano Ronaldo nodded Real back ahead.

But Valencia goalkeeper Vicente Guaita will feel he should have stopped the decisive goal after allowing the 20-year-old's angled drive to squirm past his hands at the near post.

It was a match in which Real did not want drop any more points and fall further behind the top two going into the winter break.

And the relief of their players and coach Carlo Ancelotti was clearly evident as they celebrated the winner.

The hosts were led by reserve-team coach Nico Estevez - following Monday's sacking of Serbian coach Miroslav Djukic - and produced a plucky display at a noisy Mestalla.

But the six-time Spanish champions were unable to frustrate Real by equalising for a third time and remain 11th following a mixed start to the season.

The Spanish top-flight has a two-week break over the Christmas and New Year period, with La Liga clubs returning to action on 4 January.