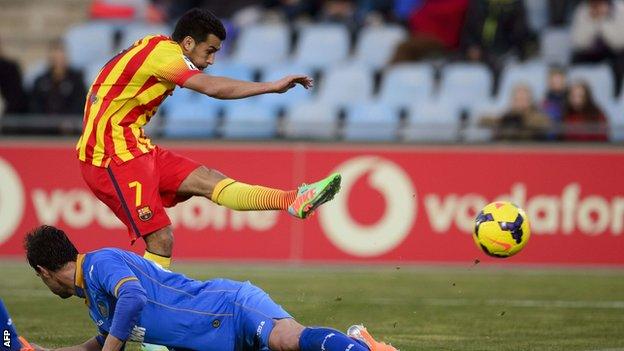 Getafe led 2-0 inside the opening 15 minutes after Sergio Escudero drilled in after a neat one-two and Lisandro Lopez powered in a free header.

But Barca, without the injured Lionel Messi and suspended Neymar, led before half-time thanks to Pedro's treble.

Since Getafe reached the Spanish top-flight for the first time in 2004-05, Barcelona have been crowned league champions in each of the six seasons that they have previously won at the Coliseum Alfonso Perez.

Gerardo Martino's side knew they needed to beat eighth-placed Getafe with anything other than a 1-0 win to move back ahead of Atletico, who won 3-2 against Levante on Saturday, on goal difference.

The Spanish top-flight has a two-week mid-season break over the Christmas and New Year period, with La Liga clubs returning to action on 4 January.

While much of the pre-match focus concentrated on Barca's ability to cope without attacking duo Messi and Neymar, it was the away defence which was severely questioned in the opening stages at the Coliseum Alfonso Perez.

They went behind when Escudero exchanged passes with Angel Lafita before firing home from close range.

But the Catalans' revival began as Pedro proved he could deliver in the absence of Messi and Neymar with trio of a clinical finishes.

Pedro is the first Barcelona player to have scored and/or created at least four goals in a La Liga game this season.

The winger raced on to Fabregas's pinpoint pass and then watched his chip have enough power to evade Getafe goalkeeper Miguel Angel Moya's grasp.

Pedro then cut in from the left flank to curl an unstoppable shot into Moya's top corner from the edge of the area and, just two minutes later, collected Jordi Alba's cutback to calmly slot in his third.

Barcelona enjoyed a measure of control after the break before ending Getafe's unlikely ambitions of mounting their own fightback with the fourth goal.

A wonderful team move saw Sergio Busquets break on the counter attack, before finding the supporting Pedro whose right-wing cross was emphatically volleyed in by Fabregas.

And the ex-Arsenal player added another from the penalty spot after Pedro was clipped by Getafe midfielder Borja Fernandez.